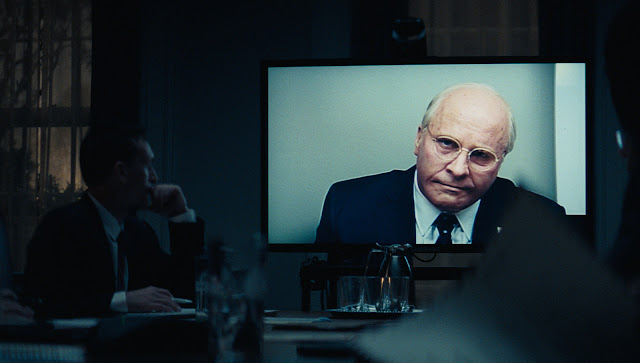 Whenever a biopic is released on a controversial public figure from either past or present, our favorite conversation is restarted about how fair and accurate the treatment of said subject will be. Strangely enough, the more polarizing they are, the higher standard the filmmakers seem to be held to. Will it be a hatchet job or an overly sympathetic portrayal that humanizes their irredeemable actions? Maybe a balanced mix of both? Depending upon who you ask, Steve Jobs was either vilified as a soulless monster in Danny Boyle's Jobs or was let off the hook too easily. Mark Zuckerberg was a meglomaniacal antisocial parasite in The Social Network, or if you prefer, simply a shy, ambitious genius who developed a web site to impress a girl. Oliver Stone's W., signaled what many believed was the neutering of a once great filmmaker who failed to go for the jugular in depicting a ripe for skewering Bush 43 as he exited office. Now, writer/director Adam McKay makes up for that with Vice, a movie unlikely to spark any of those conversations since he leaves so little room for debate about how Bush's V.P., Dick Cheney, should be viewed.

On an evilness scale, Vice's rendering of Cheney lands somewhere between Hitler and Darth Vader, with a little Grinch thrown in for good measure. Without holding back, McKay unloads on his target with a contempt only momentarily tempered by his excursions into satiric silliness that end up making Cheney look that much worse by mocking him. And like his simarly topical The Big Short, it's done in trademark McKay style, jumping back and forth through time, breaking the third wall, and telling as much as it's showing. From a cinematic standpoint, it's a total mess, with a few endings too many and a tendency to treat its audience like simpletons.

For those who already despise Cheney, this preaches to the choir, even if those on the fence will gladly jump on the bandwagon once they get the film's take on what he's done. His supporters will be fuming, citing it as the latest example of the Hollywood liberal elite run amok. And they're not necessarily wrong, since this is about as one-sided an attack as it gets. But boy is it entertaining, taking risks few political dramas or comedies have attempted, much less gotten away with. It doesn't all connect, but when it does, it's pretty vicious.

Pinning down exactly when the story of Dick Cheney (Christian Bale) begins and ends is no easy task, but it speaks volumes that one of the the first glimpses we get of the future Vice President is as a young man drunkenly stumbling out of his car after being pulled over by Wyoming police in 1963. The journey that takes him from that moment to the brief opening scene of him responding to the 9/11 attacks can be traced back to his relationship with power-hungry wife, Lynn (Amy Adams), the mastermind behind his eventual ascent.

It's Lynn's ultimatum toYale dropout Dick to shape up or get out that leads him to D.C.,working as an intern for outspoken economic advisor Donald Rumsfeld (Steve Carrell) in the Nixon administration. After Watergate and Nixon's resignation, Cheney rises to the position of Chief of Staff under President Ford, then as Secretary of Defense under Bush 41. Heart problems and a stint as Halliburton C.E.O. come after, and while the movie makes it very clear that his story could have easily ended there, it doesn't. His most infamous chapter follows with a stint as Vice President to George W. Bush (Sam Rockwell), leading to Cheney's emergence as a manipulative Washington puppet master. With his tentacles extending to even the most controversial foreign policy decisions and in worsening health, he covertly spearheads an administration many believe left a trail of death and destruction in its wake.

While it's all a bit too much to take in with McKay rarely bothering to even feign any sense of objectivity in delivering what often plays as Oliver Stone and Michael Moore's cinematic love child, it's at least tied together by an undeniably fascinating and controversial idea. The Unitary Executive Theory is the principle by which Cheney seems to live and breathe, and is firmly rooted in the belief that the President is invested with the power to control the entire executive branch. If some believe should be a limit or check on the extent of it, Cheney's not one of them, and in carrying out the duties of the Vice Presidency, he demonstrates what can happen when you extend that constitutional theory as far as possible, then wield it like a club. After stretches of cloaking every event of the script in this power-hungry outlook, it becomes clear that McKay wants you to believe Cheney's tenure as Vice, his marriage, ambitions, relationship with his daughters, and ultimately, his life, are all driven by this conceit.

McKay unequivocally succeeds at depicting this worldview, while also making excellent use of an unknown narrator named Kurt (Jesse Plemons), who we're told has some kind of relationship to Cheney that's cleverly kept under wraps until the film's final minutes, paying off in a major way. Some may find that to be the story's real hook, if not for Bale's rightfully heralded performance, which manages to do something the film itself only rarely manages to: humanize him. And simultaneously demonize him. With a massive weight gain and prosthetics, he not only looks the part (complete with a scary facial resemblance), but really understands it, even in places where the screenplay seems to be mocking every facet of his ideology.

Bale conveys this urgency in the man to plow forward because somewhere along the way, be it from Rumsfeld or his wife, it was drilled into him that history is written by the winners. This path replaces alcohol as his addiction, but like most, he's only as good or bad as who's surrounding him. While it's become sort of a running joke to guess which supporting role Amy Adams will be annually nominated for and lose, her work as Lynn Cheney ranks amongst the strongest in that regard, kind of an expanded version of the ice cold character she played opposite Philip Seymour Hoffman in The Master, albeit even more outrightly devious and controlling. In other words, she's living proof that behind every successful man is a woman. And the (fantasy?) scene where they recite Shakespeare to each other is really a keeper.

Despite earning a nomination himself for this, Sam Rockwell provides what essentially amounts to amounts to an SNL characterization of George W. Bush. Whether or not that's McKay's intention (and it's easy to believe so), it might be the only element in the film that plays as an all-out comedic farce. Depicting Bush 43 a moronic bumbling drunk who can't spell his own name or tie his shoes is undeniably low-hanging fruit, but it also seems very dated, more in line with something we'd see on some sketch show a decade prior. Is that the point? Either way, it begs the question of what time and distance has done to our percetion of his Presidency. Often, it's tough to tell if the movie's in on its own jokes or not, as Rockwell's portrayal is basically everything Josh Brolin resisted doing in W.

Less broadly comedic is Carell's performance as Donald Rumsfeld, who ends up as kind of a tragic figure of sorts after his maniacal mentoring of Cheney. A little goofy, but smart and impulsive, Carell strikes just the right chord, making you wish he had an even more screen time. Tyler Perry shows up as Colin Powell, an uncredited Naomi Watts cameos as a FOX News-like anchor, along with nearly half a dozen "blink and you'll miss it" appearances from various actors as figures like Gerald Ford, Condoleezza Rice, Henry Kissinger and Roger Ailes.

If there were any lingering doubts as to how you're supposed to feel about Dick Cheney, McKay very proudly posts his reminders at every turn that you better hate him! And if you don't, he'll make sure you will by the time Vice ends. Unfortunately, that end point isn't exactly clear since a moment arrives late in the third act that seems to signal a perfectly logical conclusion, yet he keeps going, missing the opportunity to close on a single, powerful image that perfectly encapsulates his subject's life.

Even after an ailing Cheney is fighting to take his last breath due to heart problems and waiting on an eleventh hour miracle, the movie manages to get more shots in. Is this supposed to be the most one-sided of poltical takedowns? Or is it a spoof of one-sided political takdowns? We may never know, but with Cheney's legacy sealed, he gets a film as messy, muddled and confounding as he is, succeeding most at turning him into a bigger showman than he could have ever hoped to be.
Posted by jeremythecritic at 4:59 PM