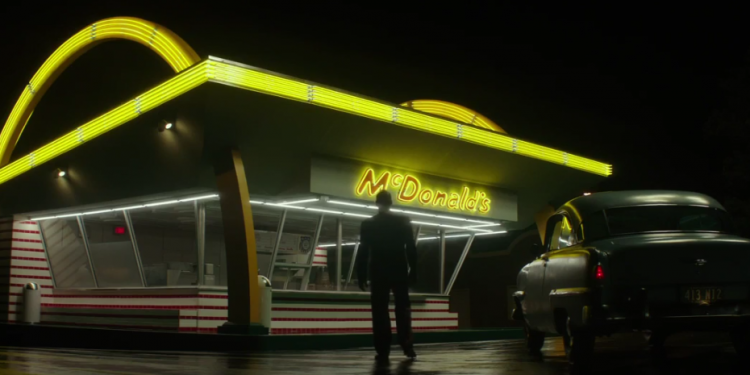 When we first meet Ray Kroc, a failed traveling salesman in his early fifties from Illinois, he's peddling industrial milkshake mixers to uninterested restaurant owners. That is until he meets the McDonald brothers, the only two guys crazy enough to buy from him. What happens when Ray goes out to their San Bernadino, California diner in 1954 is not only one of the most memorable sequences in John Lee Hancock's The Founder and the story's catalyst, but a love letter to the power of creativity and amazement. If it was hard to grasp just how revolutionary the concept of McDonald's was at the time, Ray's reaction to getting his burger in 30 seconds in disposable wrapping as families enjoy their meals next to him, tells you all there is to know. You can see and feel exactly why he's so bowled over by it, and watching the scene, you'd be forgiven for thinking it's the greatest idea that ever was. At the time, and even today, there's a lot of truth in that. But an idea is just that until it becomes something more. Something bigger. Ray Kroc liked to think big and after years of hawking bad products, he knew a sure bet when he saw it. What he lacked in creativity he made up for ten times over in persistence and business savvy. A visionary who saw the limitless potential in someone else's concept, he ran with it in a way they couldn't, morality and consequences be damned.

At its core, The Founder really boils down to one question: At what point does an idea become so great that it needs to be shared with the world? And once it is, what's the cost? The answer to that casts a shadow over the film that completely reframes Ray's aforementioned visit to McDonald's Burgers in San Bernardino and his contagious enthusiasm. He was right to do whatever it took to push this through just as the McDonald brothers were in fighting to preserve the integrity of their creation every step of the way. And just as he was wrong to screw them out of what was rightfully theirs, an equally strong case can be made for their inflexibility and resistance to change. And yet the man we see at the end, as ethically compromised as he is, still strangely remains very much the same one we met at the beginning. That's the true genius in Michael Keaton's complicated, unfairly overlooked performance, which already seems destined to go down as one of the most underappreciated of his career.

The arrival of Ray Kroc (Keaton) at McDonald's Burgers represents for Dick (Nick Offerman) and Mac (John Carroll Lynch) and Mac McDonald to correct an opportunity they let slip through their fingers once before. An unsuccessful previous attempt to franchise out their revolutionary fast food burger joint was marred by the challenge of maintaining the same high level of customer service and food quality throughout the chain. Enter Kroc. The brothers are approached, and actually somewhat stalked, by the Prince Castle salesman who's so impressed with their unique business model emphasizing a speedy food delivery service that keeps costs down, he wants to hear their story. And it's a pretty amazing one, as they tell him how they started out in the movie industry before eventually landing in the food service business, which they thought was in serious need of some tweaking. Chalk diagrams on a tennis court provided the blueprints for what would become McDonald's kitchen, with each station serving a specific function in getting quality food to the customer as quickly as possible. No more waiting at drive-ins.

While Dick's heavily skeptical of Ray's interest from the onset, Mac's convinced they finally found the guy that understands their product and can help them fulfill their dreams of expansion. After appealing to their sense of patriotism, envisioning the golden arches side by side with American flags and church steeples across the nation, they reluctantly agree to a deal.  And while it initially does seem to be the perfect match for all involved and Ray makes some smart decisions, the brothers' traditional approach soon clashes with his towering ambition. Mortgaging his home while sacrificing his marriage to wife Ethel (Laura Dern), he continues expansion at a rapid rate, soon realizing this will never work unless he hires the right people and gets out from under the thumb of the brothers, who have him locked in a contract mandating them final say on any new idea he has. In order to succeed Ray will have to get creative, even if the morally questionable moves he makes in the name of business could forever taint his claim as the true "founder" of McDonald's.

If Ray sees dollar signs the first time he lays eyes on the brothers' establishment, there's also a certain admiration and respect for what they created, as well as a desire to prove to everyone he isn't the failure they believe him to be by shepherding it to greater success. While he likes the brothers, he also knows they're gullible and not businessmen, which could explain why they were presumably taken for a ride in their last attempt to franchise. They need him just as much as he needs them if there's any desire in the brothers to build on their creation. And Ray isn't kidding himself on his own prospects either. He's at an age where this is clearly his last shot and he's already looked at as a joke by he and his wife's country club contemporaries, who can't wait to get in on the action when they realize his latest dream could actually bare financial fruit.

Ray's complete rejection of these rich, retired country clubbers' investment in this franchising when he recognizes their laziness and lack of commitment is probably his finest hour. Seeing him outside the restaurant on his hand and knees cleaning up the trash, more determined than ever to hire those who work and care about quality is the strongest case to be made for him as a decent human being. That, and his willingness to hire anyone from any walk of life (sometimes right off the street) he feels will do a good job is another feather in his cap. And yet Ray is also one of the worst candidates to accumulate such success and wealth at this rapid a rate because he's been beaten down so long. With a chip on his shoulder and something to prove, he's like a kid in a candy store when given just a taste of it. Not only does he roll over the McDonald brothers, he basically discards Ethel at the first sight of Joan (Linda Cardellini), the captivating wife of a franchisee (Patrick Wilson).

Despite knowing the terms when he signed, you could see how the brothers' dismissal of every one of Ray's ideas as crass commercialism or off-brand send him over the deep end. Ray definitely doesn't play fair and surely doesn't care, but while even his more Machiavellian methods could be defended as necessary to getting McDonald's where it needs to go, it doesn't explain the lack of credit or compensation for them once it gets there. He'd explain it away by saying it was business but you can't help but think back to Dick's statement that they "let a wolf in the hen house." Toward the third act of the picture it becomes clear that they may have actually franchised out their company and lives to someone whose business ethics are more closely aligned with Daniel Plainview's from There Will Be a Blood.

The casting of Keaton as Kroc is nothing short of a masterstroke. He's so inherently likable as a scrappy underdog that it could seem incomprehensible he'd take the actions he does later if not for the fact that this is an actor equally skilled at going to those darker, unlikable places. John Lee Hancock (director of The Blind Side and writer of 1993's A Perfect World) hasn't necessarily made a dark film here, but against the bright, nostalgic hue of 1950's America gorgeously photographed by cinematographer John Schwartzman and memorably scored by Carter Burwell, is this undercurrent of greed and avarice. Most of that is provided by Keaton, who has to simultaneously juggle multiple balls in the air playing someone who could have easily been categorized as one-note meglomaniacal businessman in the hands of a lesser performer. We don't sense your typical "transformation," because what happens is exactly what Ray wanted to have happen the second he saw McDonald's Burgers.

That gleam in Keaton's eye was there when he stepped on the lot and it's up to audiences to reconcile that with what comes later. While a specifically memorable shot in the film directly references a key moment in Citizen Kane and while it shares similar themes, a better comparison might be The Social Network, as a rejected outcast finally gets the opportunity to prove himself, hurting those around him on his way to the top. This is Keaton's movie, as it should completely be, but Nick Offerman really shines in his best big screen role to date as the doubting Dick McDonald, who ends up getting sucked into this anyway despite all his initial misgivings about how it could adversely affect his brother's health.

Released with such little promotion and fanfare that few knew it existed at all, it almost seems fitting that the studio behind The Founder is embroiled in a lawsuit over how mismanaged its release actually was, potentially costing Keaton another shot at an Oscar, this time for a performance that certainly would have otherwise gotten awards attention. Someone dropped the ball, which is a shame considering it's exactly the kind of film we need right now, and one of a select few this year that says as much about the times we live in now as the seemingly bygone era during which it took place. Hate or love Ray Kroc, there's no denying that what he did worked and had a serious effect on consumerism and branding all over the world, with its ripples still very much being felt today. How he did it should continue to be fodder for debate. You could say he drank the McDonald brothers' milkshake. And as an added insult, he used powdered milk.

Posted by jeremythecritic at 9:08 AM