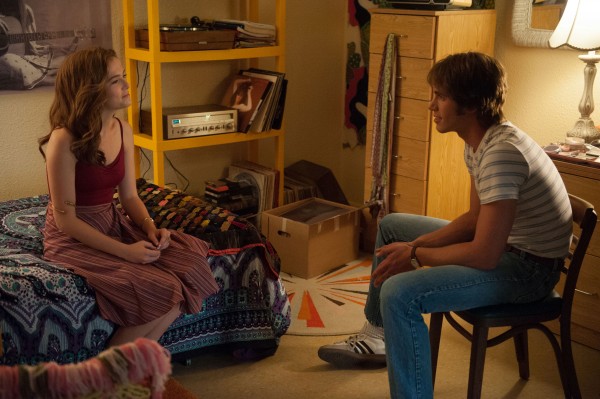 Richard Linklater has this gift of being able to extract meaning from what on the surface should seem like nothingness. It appears as if he's more interested in watching people hang out than plot, conflict or any kind of narrative structure we'd normally associate with crowd-pleasing movies like the one he's made. Even its jarringly punctuated title, Everybody Wants Some!!, doesn't seem to mean anything aside from the obvious Van Halen shout-out, or at least means as less as its previous working title, That's What I'm Talking About. It would be all too easy to write this off as a self-indulgent nostalgia trip for its director, who chose as a follow-up to his recently Best Picture-nominated Boyhood, a movie centering around a bunch of 80's college jocks looking to get as drunk, laid and stoned as possible in the last days before classes start. And yet, it's still strangely wonderful.

This has been Linklater's specialty, dating all the way back to 1993's Dazed and Confused, to which this will be most closely compared, and for good reason, since he's labeled this its "spiritual sequel." That's a good way to put it as the tie that binds both (besides their period settings and autobiographical angle) is that laid-back, fly-on-the-wall quality of watching authentic characters hang out, only to realize by the end how much you've grown to care about them. It's the opposite of self-indulgent, as it never really asks you think or feel anything and the beats of its bare bones story hardly register as it's unfolding. You just watch and listen, losing yourself in it.

Working also as the perfect follow-up to the experimentally significant Boyhood, it picks up at the same life stage, only with entirely new characters and set in a different era. Carrying with it the same sense of almost improvisational spontaneity that's become Linklater's calling card, you rarely feel your strings being pulled.  And of course, the soundtrack rocks. If there are certain filmmakers who need to spread their wings and branch out in different directions, he's definitely not among them. Not when he does this so well.

Upon their arrival, the coach promptly lays down two rules: No alcohol in the house and no women upstairs. Within 12 hours, both are broken and whatever superficial differences these teammates have evaporate in their united quest to attain both, finding them party hopping in search of the wildest time. What Jake finds instead is Beverly (Zoey Deutch), a quirky theater student with whom he connects on a level that's far different than what his new friends are experiencing. As he comes out of his shell and the guys take him in as one of their own, there's still that looming issue of classes beginning in a matter of days, and while they might be too stoned, drunk or hung over to notice it right now, the rest of their lives are about to start.

Considering this is a movie about a college baseball team, there's only one extended sequence late that takes place on the field. It's worth noting that section works really well because so much quality time is spent with all these personalities beforehand. We're either at the house, in the car prowling for girls or at a nightclub or party from the minute we're introduced to the team. It's one of those movies that will have detractors complaining that "nothing happens" throughout its running time. To an extent, they'd be right since so little occurs in terms of actual action, at least as we're accustomed to seeing it in a coming-of-age comedic drama like this. But it's also a movie where everything happens since Linklater has the ability to capture what's it's like just hanging around, and in talking about seemingly innocuous things, revealing more than any manufactured conflict would. Much of that can be attributed to the casting, with a group of little known actors who so believably slide into the skin of these early 80's jocks that leave little doubt that we're watching or listening to anyone other than the authentic article.

As the protagonist, Jake (serviceably played by Jenner) might be the least compelling character, if only because he's our entranceway into a world where everything seems to be happening around and to him, dragged along for the ride, but quickly adapting. The movie really belongs to Glen Powell as Finnegan who steals every scene in a way reminiscent of Matthew McConaughey's big breakout in Dazed and Confused. He's goofy when necessary, but the smartest and most cunning of the bunch, frequently infusing the story with a surprisingly amount of pathos. It's when he's on screen (which is nearly the entire running length) and eventually when Zoey Deutch enters the picture as Jake's love interest, Beverly, that the movie feels most alive and real. The scenes between them carry a realistic Before Sunrise-like vibe that not only takes the film to an entirely different and welcome place thematically, but to a new setting as well, with the jocks finding themselves at an artsy costume party thrown by the theater students. This entire sequence, and it's results, represent the movie's high-water mark, both visually and in terms of its meaning for the characters.

Whether it's that party, or a punk concert earlier, there's this idea so perfectly captured by Linklater that the social barriers present in high school now cease to exist in this four-year universe where everyone can indiscriminately go from party to party adapting to a different crowd and taking on new identities. And despite the script being a semi-personalized account of his own college experiences and undoubtedly conjuring up memories for those with similar ones, he manages to show this without relying exclusively on nostalgia. Sure, the period details such as the costuming, production design and music are spot-on, but it's just there because we are, rarely drawing attention to itself or stopping for conversations that unnecessarily remind us the era we're in.

In the midst of all this, it also manages to be genuinely funny, and not in the frat boy, toilet humor kind of way the trailers falsely implied. Many of the gags and one-liners are smart, playing off the characters' personality quirks and absurdity of various situations, which is becoming increasingly hard to do well in an R-rated comedy. At nearly two hours, there's a strong argument to be made certain scenes needed tightening and trimming, but that's almost always the case of late. At least here we're given extra time with people worth spending it with. And it would all probably play even better upon a rewatch, as there's a hypnotizing quality about this that practically invites it. Something about it is hard to shake, suggesting a lengthy shelf life for both the film and careers of its stars.

It's tempting to say Linklater's recent work invites comparisons to Cameron Crowe due to the increasingly autobiographical nature of his output, but that's not entirely accurate since he's never been as transparent a filmmaker. This will turn some people off, while others appreciate his dedication to showing instead of telling, wearing us down to the point that we're forced to admit he's on to something with these characters, some of whom may or may not strike a chord of recollection in our own lives. And it's because of his almost maddeningly laid-back approach that the ending feels so right, revealing an unexpected depth that further justifies the film's existence. It's only when considering a key character's name and the phrase written in class in the final scene, that we realize how true the tagline is that they "came for a good time, not a long time."

Posted by jeremythecritic at 8:56 AM