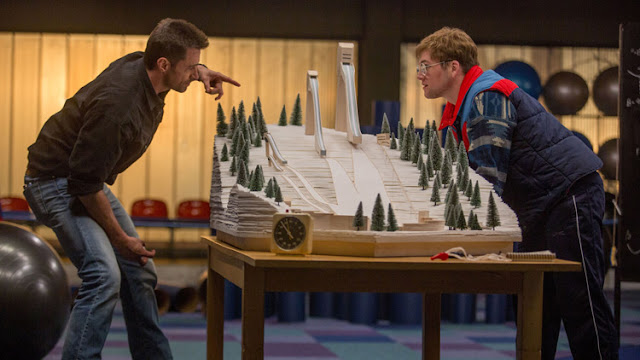 Besides being at the center of an inspiring underdog story that seems tailor made for the big screen, the qualities possessed by British Olympic ski jumper Eddie "The Eagle" Edwards will be familiar to anyone who's ever seen an underdog sports movie. A person who's so singularly focused on achieving the impossible that they're not taken seriously in the slightest. They either have a lot of guts or are really dense, and through much of Dexter Fletcher's deliriously entertaining biopic Eddie The Eagle, our title character is confronted by naysayers informing him it's the latter. Whether that be a parent, his teammates or coaches, the one thing they can all agree on is that he's a lost cause. And while much of that is realistically warranted and grounded in concern for his safety, more of it has to do with how he looks and acts. Viewers who think they know how it's all going to pan out are completely right, mainly because it did actually happen and the scenario represents one of the most reliable and predictable movie formulas around. But when it's executed well, it's also really effective, and this is one of those great reminders of that.

As a young boy growing up in Great Britain in the 1970's, Eddie Edwards (Taron Egerton) always dreamed of one day competing in the Olympics. Awkward and hardly much of an natural athlete, he practiced various events in the backyard and around the house, frequently encouraged by his supportive mother, Janette (Jo Harley) while his hard-nosed father, Terry (Keith Allen) dismisses his Olympic dreams as a time waster. After succeeding as a skier as a teen, he sets his sights on the Winter Games, eventually taking an interest in ski jumping.

With Great Britain having gone decades without a ski jumping team and the British Olympic Committee determined to keep him out, Eddie begins training in Germany, where he meets former American ski jumping champion turned alcoholic snow groomer, Bronson Peary (Hugh Jackman). Still bitter from his acrimonious exit from the sport, he initially refuses Eddie's pleas to train him, dismissing him, as an unteachable klutz. But Eddie's tenacity and the verbal abuse he takes from the more experienced Norwegian jumpers causes Bronson to take him under his wing, attempting the impossible in helping him qualify for the 1988 Winter Olympics. But what might be the bigger challenge is him being taken seriously once he gets there.

Even during a time when amateurs like Eddie could actually qualify for the Olympics, what he accomplished was pretty newsworthy. Then again, the sports movie template is built on true stories exactly like this, so while the amount of truth always varies, it all really comes down to the execution. This has a lot going for it, including some excellent early practice scenes establishing the young, awkward Eddie's Olympic fanaticism, seeking inspiration from books like "Moments of Glory" and "My Life in Ski Jumping," the latter being the memoir of Bronson's former, estranged coach, Warren Sharp (Christopher Walken). Once we get to the actual competition, the action scenes are well staged by Fletcher, at times even inducing a sense of dread as we look down through the eyes of this clueless rookie who's talked himself into believing he can jump from 40 to 70 and then eventually 90 feet.

More often than not, Bronson's job seems to be stopping this kid from killing himself, reluctantly and against his better judgment evolving into a coach and mentor. It's only upon realizing that with a lot work, he may actually have a shot. Sure to be overlooked, Mark Margeson's throwback musical score stands as one of the year's big achievements in marrying a film's era with its story and thematic content. Somehow sounding like a blissfully bizarre cross between Vangelis' Chariots Fire, Hans Zimmer's Days of Thunder and the theme from The Greatest American Hero, it's so steeped in the scores of that era that many will probably assume it was lifted from an 80's sports movie. That extra touch goes a surprisingly long way here, as it's tough to imagine certain scenes working as well without it in the background, or even in some more obvious moments, the foreground.

Disguised enough behind crooked eyeglasses and oversized clothes to bare a striking physical resemblance to the film's real life inspiration, Taron Egerton makes Eddie endearing, gutsy and likable, portraying him in the best tradition of screen sports underdogs. In the too few instances when the material calls for him to get serious, he proves capable of that as well. Playing a fictional composite of the real-life Eddie's various coaches, it isn't a backhanded compliment to say Hugh Jackman gives one of his more charismatic recent performances as Bronson Peary.

Effortlessly owning every scene he's in, it was a good move to cast Jackman and an even better one to completely ignore reality in favor of letting him help create this character whose relationship with the protagonist drives the story. He also has the film's best musical moment, when Bronson takes to the slopes to show his pupil and a shocked Norwegian ski team how it's done. Like most sports movies, it's usually as much about the mentor as his student and Bronson still has some demons to deal with concerning how his career ended, permanently damaging his relationship with his ex-coach. Of course redemption can only come through coaching Eddie.

Possibly the strongest aspect of the entire film is the fleeting acknowledgment, even made by Bronson himself, that this kid is in danger of becoming a joke, viewed as nothing more than a circus sideshow act to be laughed at by fans and the ratings-seeking media.  If he fails to deliver then his 15 minutes are up, and Olympic history won't look kindly on him, if at all. Briefly, the script explores this fascinating idea before safely retreating to comfortable confines of its formula. That's fine, but you can't help but think it's a reminder that as immersive as these sports movies are, there is a creative glass ceiling in place that very few have been able to shatter.

It's slightly disappointing when the screenplay leans more heavily on the comedic elements than the interesting implications of Eddie's popularity, but this just isn't that type of movie. That much is clear with the casting of Christopher Walken as Bronson's legendary Olympic coach. On one hand, his presence in any film is always a welcome event, but accompanying it is this undeniable expectation of weirdness. Surprisingly, there isn't too much of that here and he does a fine job in his one major dramatic scene, adding to rather than distracting from the movie's inspirational climax.

It's hard to find a genuine crowd pleaser that goes down as easy as this, and regardless of how many details or facts were adjusted along the way, whatever was done worked in terms of providing maximum entertainment value. Fitting comfortably in the wheelhouse of similarly themed sports films like The Rookie, Miracle, Remember The Titans, Invincible, Cool Runnings and the more recent McFarland, USA, Eddie The Eagle may even be a cut above a few of those, managing to get more little things right.

Whether it's the performances, the direction, the soundtrack or the skiing scenes, there are are many moments where you think it will take flight like it's protagonist, ascending to upper echelon of sports movies occupied by the likes of Rocky, Rudy or The Karate Kid. The story was certainly ripe for it and there's an artfulness in Fletcher's filmmaking that suggests that if the writers took things a little more seriously, it could have gotten there. And while that's an ironic criticism given its subject, I'm not completely sure this would be as enjoyable if it did. So what we're left with is a solid, inspiring mainstream sports movie that can be recommended with unqualified praise to basically anyone. And that counts for a lot.

Posted by jeremythecritic at 10:02 PM