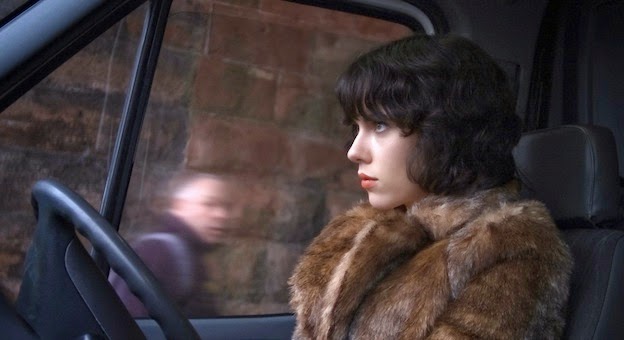 Every once in a while, an artsy, adventurous film no one can seem to agree on or make any sense of comes out and sparks debate. Such a movie divides critics while completely frustrating mainstream audiences gutsy enough to see it. It then starts showing up on year end lists, before eventually being discussed in the years ahead as some kind of "overlooked masterpiece," remembered long after the nominated features of that year have faded from memory. Other than alienating audiences (while actually focusing on an alien), Jonathan Glazer's bizarrely repetitive and dopey Under the Skin isn't one of these. Not even close. It isn't about anything. It has nothing important or even unimportant to say, save for a few gripping sequences that provide a temporary high. That it's well made and carried by a somewhat mesmerizing lead performance, is its saving grace. But let's be honest. It has to be carried by such a performance because, well, what else is there? When big name actors or actresses engulf themselves in edgy, artier fare it's usually to gain street cred or challenge themselves as a performer. Such a move is commendable, assuming said project also exists for reasons beyond that. purpose. I'm not sure this one does despite living up to its title by getting under my skin. In all the wrong ways.

Loosely adapted from Michel Faber's 2000 novel, the film is more of an atmospheric tone poem than a fully realized narrative, opening in Scotland as a motorcyclist finds a young woman's body by the side of the road. It's difficult to even describe what happens next other than saying this woman's skin is shed to reveal another nameless woman (Scarlett Johansson) who we can assume from events that follow, is an alien. And not just any alien, but one that's very seductive and overtly sexual, driving around Scotland in and and picking up men on the street via a selection process we're not quite privy to. These are her prey, whom she's easily able to lure back to her place, a black, vacant void where they find themselves submerged in a gooey liquid before meeting their demise. She continues to search for potential victims and finds them, all while the mysterious biker (real pro motor racer Jeremy McWilliams) follows her, retrieving bodies along the way. Becoming increasingly comfortable asserting control in an environment she knows little about, the hunter will soon become the hunted.

With a dialogue-free prologue and even very little spoken during the entire film, Glazer (who previously directed 2004's almost equally confounding Birth, with Nicole Kidman's dead husband reincarnated as a little boy), draws it's atmospheric inspiration from minimalist sci-fi head trips like 2001: A Space Odyssey and The Man Who Fell To Earth, while matching neither in terms of content or ambition. But he deserves credit for trying, especially in terms of the imagery and visual effects, which were achieved practically and look all the scarier and more realistic because of it. The death scenes are mesmerizing the first few times, until you realize their conclusion will inevitably lead to her prowling the streets for men again and long, drawn out stretches of banality as she chooses her victims, and then, perhaps more painfully, engages them in what this movie considers conversation.

The only exception to the narrative's cyclical structure is alien woman's encounter with a lonely, disfigured man (played by actual neurofibromatosis sufferrer Adam Pearson) who's briefly enlivened and confused by her sexual advances in a scene that recalls the classic Twilight Zone episode, "Eye of the Beholder" in how we see how someone with no reference point for society's definition of physical beauty would view a disfigured person. Momentarily, the script has something important to say, making it easier to imagine the film earning all the wild praise it received had it focused exclusively on the ideas contained in that relationship.

That the cast consists mainly of unprofessional actors speaks to its authenticity and realism, even if they're trapped in a universe that doesn't do much with them and isn't all that interesting. But everything revolves around Johansson, who's appropriately seductive while also conveying the confusion and wonder of an woman dropped in an unknown world her character is struggling to understand. That said, you don't cast a big, recognizable star like her in something this weird unless you're trying to make a statement, and since we have no idea what that it is, at times her mere presence resembles a stunt. The most frustrating thing about the film is that she must have been cast for an obvious reason and we're left scratching our heads as to exactly why, besides providing male audience members the opportunity to see her strip down. She's effective in the part, but I never lost sight of the fact I was watching Scarlett Johansson in every scene since there's really no role for her to truly disappear into.

It's easy to understand why so many critics would embrace this risk-taking diversion, especially considering every other movie released these days seems to be a carbon copy of the next, more dependent on building a brand than creating a work of art that's unique or compelling. But this is an offender at the opposite end of that spectrum, trotting out highbrow arty fartsy nonsense at the expense of potentially intelligent observations about life and humanity, which is sci-fi's bread and butter. And that's coming from someone who loved Southland Tales, Synecdoche, New York, Enter The Void and Beyond The Black Rainbow, all movies perhaps even stranger than this, but containing real ideas. While it's problems don't seem likely to be remedied with a second viewing, you never know. If nothing else, Glazer deserves credit for infuriating me twice, and I hope he keeps doing it since the worst thing that could happen is his right to keep making bizarre movies being taken away. This is a bad one, but at least he had the talent and wherewithal to fail interestingly. That's more than you can say for most.

Posted by jeremythecritic at 10:27 AM