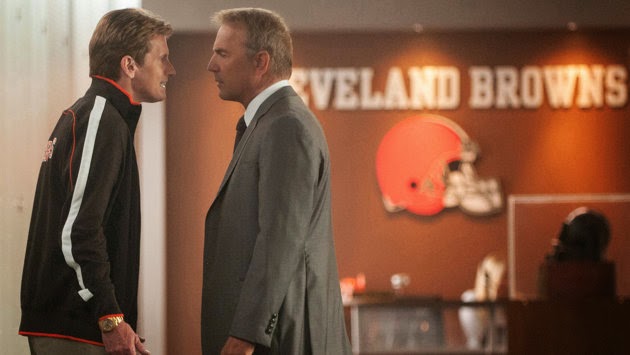 Draft Day is an entertaining crowd pleaser that goes down easy, telling a tight, well-constructed story that accomplishes exactly what a movie of this genre should. But more importantly it's smart, while featuring a really impressive lead performance from an actor who again reminds us of his value in the right role. On paper, these would seem to be all the ingredients for success so it's perplexing that mainstream audiences, who usually eat this stuff up, stayed away. Until you consider this isn't about a superhero, but a general manager of a sports franchise struggling to rebuild his team and life. While it's loaded with football terminology and sports talk, it's basic stuff and not so "inside" that it would prevent those unfamiliar with the NFL from grasping the gist of what's happening or appreciating the protagonist's dilemma.

Cleveland Browns General Manager Sonny Weaver Jr. (Kevin Costner) has a lot weighing on his mind, having not only fired his own father as coach, but mourning his sudden death a week before the NFL draft. Holding the the seventh overall pick heading in, he's made the controversial decision to trade their next three first round picks over the next three years to the Seattle Seahawks in exchange for their number one. It's a steep price to pay, but the reward could be University of Wisconsin quarterback and Heisman Trophy winner Bo Callahan (Josh Pence), which sits just fine with Cleveland fans and team owner Anthony Molina (Frank Langella), who demands Sonny "make a splash." But potentially giving up their future doesn't impress coach Vince Penn (Denis Leary) or current QB Brian Drew (Tom Welling), who thought he was that future before getting injured.

With lingering doubts about Callahan's potential starting to rear its head, Sonny has other options on the table like outspoken Louisiana linebacker Vontae Mack (Chadwick Boseman) and Florida State running back Ray Jennings (Arian Foster), whose father, Earl (Terry Crews) played for the Browns. But Molina only wants Callahan, and Sonny could be out of a job if it doesn't happen. And simultaneously, his girlfriend Ali (Jennifer Garner), who manages the Browns' salary cap, hits him with the news that she's pregnant. With his father gone, and lacking respect from both his staff and fans, he now must step out of that shadow to rebuild the franchise and carve out a new life that's uniquely his own.

Reitman's juggling a lot of balls at once here and manages to keep them all in the air with little confusion as to what's going on at any given moment in the plot. Like the superior Moneyball, it's loaded with scenes of big deals being made, decisions being second guessed and back peddling. But unlike that film, much of that conversational action is handled with a split-screen as Sonny spends what feels like over half of the film's running time on his cell, which is obviously a necessity given the nature of his job and the circumstances (not to mention the fact he's human). What's surprising is how exciting  this turns out to be as his decision to surrender all of this ailing franchise's first round draft picks for the foreseeable future, and his mad scramble to fix it, presents a certain side to the sports equation that does differentiate it from Moneyball.

Rather than relying on statistics, Sonny often acts only on gut feelings and emotion, much to the ire of the Browns staff who prefer to look at the cold, hard facts. Sonny's not as smart as someone like Billy Beane, but he's a hustler who can persuade people that even the craziest idea will work. And if he can't persuade them, well then, who cares? He can just fire them anyway. Many times in this movie he's wrong and sometimes even when he's right it looks like he just got lucky because he had to guts to risk it all. That's a shade of nuance you don't often find when managers are depicted on screen, until you remember he's at such a low point personally and professionally that he has nothing to lose. His reasons for doubting "can't miss" prospect Callahan seem really sound and crazy at the same time, even if I don't know enough about the intricacies of drafting players to speak on its accuracy. But the best thing about the movie is that you don't need to. It's accuracy is irrelevant since Sonny isn't making decisions based on that. The script creates a compelling mystery around what's wrong with Callahan, then engages us with an interesting discussion about why it matters.

This is exactly the kind of role Costner should be playing at this stage in his career and seems almost tailor-made for an actor who's experienced some of his greatest onscreen successes in the sports genre. It's not baseball, but all the qualities he brought to Field of Dreams, Bull Durham and For the Love of the Game transfer seamlessly to the context and setting of pro football. There are a lot of unfair misconceptions about him as an actor, but only times he's faltered was when asked to go over-the-top or play larger than life characters in big budget spectacles, rather than normal people struggling with real problems. He's always been an underrated character actor pushed down our throats as a movie star. That makes this is perfect for him, taking full advantage of the actor's laid back, cool persona in a believable way that doesn't ask too much of him or the audience. As a result, he's superb. Take how he plays a pivotal scene with Tom Welling's injured QB, silently acknowledging he's fully aware how angry and betrayed his player feels, while resolute in doing what's best for business and letting him know who has the final say. Welling is also phenomenal in his brief role, totally believable as an NFL QB and commanding the screen with an authoritative presence that feels miles removed from Smallville.

Aside from them, the rest of the film is equally well cast across the board with Frank Langella leaving no doubt he's the profit-driven owner of a major sports franchise, calling the shots and making everyone's job hell. Denis Leary is just as plausible as the loudmouth, opinionated coach who refuses to back down to his G.M. since he's ultimately held responsible for whatever team Sonny puts together. Jennifer Garner is saddled with the girlfriend role, but she's one of the few top actresses who can believably play a nerdy brainiac so the lawyer role fits, bridging the gap between the two worlds. She and Costner don't exactly light up the screen with their chemistry, but they're bickering and talking about football most of the time anyway. Their sub-plot's the weak link, but it isn't unnecessary, and doesn't distract any from the sports side of things. The backstory concerning his dad's passing and the arrival of his mom (played by Ellen Burstyn) is handled better and of greater interest since it directly informs the events surrounding the draft.

The best way to watch this is pretending that Moneyball never existed, but Reitman makes that task easy by not only covering an entirely different sport in similar detail, but choosing to focus on a specific aspect of the business within a constricted time frame. By doing that, and having a skilled cast carry it out, he delivers a surprising amount of tension, despite us having a pretty good idea of the outcome. It's a lot of fun just sitting back and letting the script and performances work their magic, taking us there in a sensible, intelligent way. The main character may be constantly on the clock, but when it's over it hardly feels as if any time has passed for us at all.

Posted by jeremythecritic at 4:55 PM