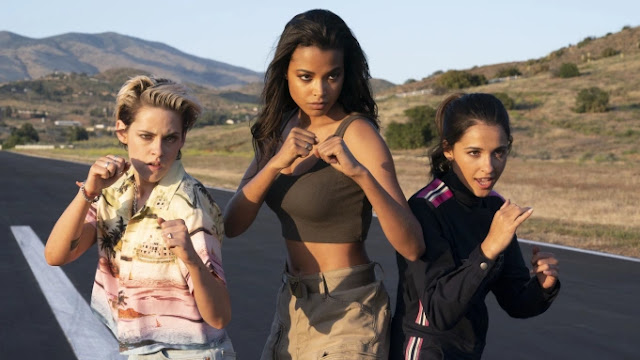 Maybe it was a happy accident for me to have recently caught the opening minutes of the 2003 version of Charlie's Angels in passing before seeing last year's reboot. In many ways it served as an eye-opening reminder that there's a certain level of quality this franchise can attain regardless of the cast, director, script or marketing. Barring a complete overhaul of the original material that inspired it, we'll probably never get a great Charlie's Angels movie, which almost seems appropriate. And now, judging from the reception to writer/director Elizabeth Banks' updated take, we may not get another one at all, at least for a very long time.

Many aren't losing sleep over the film's tepid reaction, but it's still kind of a shame considering how tough it is to determine what viewers expected or even wanted from this. Bashed as a feminist propaganda piece showing us how women have been held down by men, Banks was criticized for crafting an empty manifesto protesting the sexual objectification of the Angels by male moviegoers and filmmakers everywhere. With her excuses for its box office implosion doing little to change this perception, you could imagine my surprise at discovering that's not even close to what we get. It's light, mindless fun, in line with previous incarnations, but with a slightly less ridiculous tone.

Save for some occasionally cringe-worthy dialogue, no messages are being shoved down our throats, as the joke would have been on Banks considering the franchise will always be viewed for exactly what it is: escapist entertainment both genders watch for the women and action. In the end, all that actually matters is whether the film's any good. And this works as well or better than the others, with some minor missteps along the way. Declaring it mildly recommendable may seem like damning with faint praise, but the two hours fly by and the casting and performances result in a interesting dynamic between the leads. The trio may even be the most distinctive in terms of personalities, with the seemingly odd Angel out really rising to the occasion and silencing the skeptics. Chalk it up to lowered expectations, but this is a good time, surprisingly delivering exactly what it should, and maybe even a little more

The Angels are given their new assignment by Charlie's assistant Rebekah (Banks), an ex-Angel who's taken over for Edgar and risen up the ranks following the retirement of senior operative John Bosley (Patrick Stewart). Using Elena as their undercover decoy, Sabina And Jane must now break into the corporate headquarters to steal the Calisto prototypes before they can be duplicated and eventually weaponized. But the plot ends up running deeper than any of them anticipated as they fight against and unseen mastermind whose motivations may be more personal than expected.

Casting can be a real difference maker if the script's a mess, but luckily Banks' screenplay, while a bit convoluted, does mostly deliver the goods after brief stalling at its mid-point before the action kicks into high gear. On paper, Kristen Stewart was always going to be the wild card since she just isn't an actress most would associate with a buddy female action comedy or really any light, mainstream entertainment audiences consider "fun."

Rightly or not, Stewart's been frequently picked apart for having a dour, awkward onscreen presence cultivated from appearing in the dark indie dramas she's gravitated toward since becoming a household name from Twilight. Now, she's gone so far in the other direction, with impressive results, that it seems impossible to believe she's even in a franchise movie again, especially one that seems so sharply opposed to her substance-over-style career approach. And that's exactly why she ends up being the shot in the arm this project needs, as there's no denying that as Sabina she displays a goofy, comedic edge and charm that's rarely been evident in even her lightest of roles.

If the general consensus was that Banks was trolling fanboys by casting an actress they couldn't objectify, she must have known something since Stewart gives the film's liveliest performance. By making her a total, unabashed goofball who quickly flips the switch to get down to business when the situation calls for it, she redefines the concept of an Angel, with her character providing a perfect contrast to the more stoic Jane. Played by English actress Ella Balinska, she's the more prototypical choice, box-checking what's been the long-established franchise template of crushing bad guys while managing to look great doing it. As a character, she's presented more seriously than many of her predecessors, with combat skills being emphasized over looks, the latter of which few would blame her for coasting on. But she doesn't.

As the Angel who's yet to earn her wings, recent Power Rangers and Aladdin star, Naomi Scott, brings the goofiness as clumsy brainiac Elena, the "origin" in this origin story. In over her head and guided through a criminal ordeal unlike anything her naive character's experienced, Scott is earnestly likeable as the eyes and ears of the audience, making up her own rules as she goes along. Of course, after some fun interplay, she'll eventually earn the begrudging respect of Bosley and the Angels, with all sharing surprisingly solid chemistry together.

The plot takes a number of twists and turns, some more expected than others, but comes out on the high-end in terms of minimizing the nonsense typically associated with a franchise that's always had a problem with tone, frequently straddling the lines of what it wants to be. This fares better than most. As for the action sequences, they're competently filmed and hold your attention, while fully acknowledging this probably won't be confused with the latest John Wick anytime soon. The good news is that these scenes play considerably better than the music video-style trailers and commercials teased, or threatened, in the lead-up to its release.

The closing minutes hint that Banks had her creative engine revving for a follow-up and you can't really fault her optimism since that was undoubtedly the plan. Now, she'll have to shelve it as studio executives scratch their heads wondering what happened, surely contemplating another brilliant idea for rebooting this property. There's not a whole lot wrong with this, so unless they have this fresh, new approach to re-purposing a 1970's female-lead action-comedy adventure series on the big screen, it might be a better idea to just hire everyone back with a better, tighter script. Then again, it's entirely possible no one wants to see any Charlie's Angels movie, even one that manages to get a lot right.

Posted by jeremythecritic at 12:12 PM