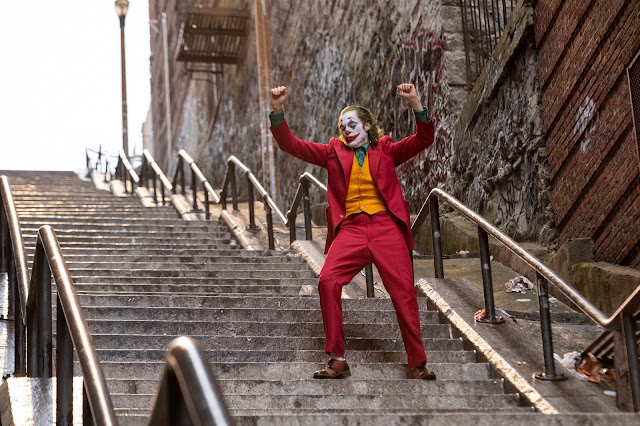 There's been a lot of discussion lately as to what constitutes a "realistic" take on a comic book or superhero property, if such a decriptor even exists. While great entertainment, the idea that Tim Burton's 1989 Batman was once praised for its dark grittiness seems downright laughable now. Christopher Nolan may have changed game entirely with his Dark Knight Trilogy, stripping away many elements that defined the genre with something more closely resembling a crime drama, but it was really Heath Ledger's Oscar-winning reinterpretation of the Joker as a nihilistic terrorist that left an imprint. Nolan was onto to something big with that approach until Marvel came along, reminding audiences worldwide that they love "fun" superhero movies, as interchangeable and corporately indistinct as they've since become. Soon, a future where every major property would be Nolanized with a healthy dose of realism and nuance fell by the wayside.

Now, with Joker, comedy director Todd Phillips does what Nolan and everyone before him was either too tentative or flat-out forbidden in going all the way with, delivering a dark psychological drama that doesn't only subvert the form, but flat-out demolishes it. The credits read "Based on DC characters" and, finally, for the first time, we can say, "very loosely." It actually shares more in common with dark psychological dramas like Taxi Driver, The King of Comedy and Requiem For a Dream, channeling the tone, look and content of those films more than any aforementioned Bat project. And Joaquin Phoenix's chilling, disturbing reimagining of this character is a full-fledged introduction, going where so few actors have in really playing the man behind the facepaint, infusing him with a complexity this long limiting genre has frowned upon. The material's depth affords him that chance, as he creates a painfully real depiction of mental illness that would be too difficult to watch if it wasn't so gripping.

It's 1981 and party clown and sometimes stand-up comedian Arthur Fleck (Phoenix) is living in a dilapidated apartment with his ailing mother, Penny, (Frances Conroy) in Gotham City. With crime and unemployment at a high, the city is also in the midst of a garbage strike and overrun with rats. Even as wealthy businessman Thomas Wayne (Brett Cullen) vows to bring change with a mayoral bid, the rift between the haves and have nots of Gotham grows larger, with no signs of relief coming anytime soon. That's especially true for the mentally ill and socially awkward Arthur, who suffers from a clinical condition that causes inappropriate, uncontrollable laughing fits. Relying on social services for seven different medications, his luck worsens when, in full clown make-up and costume, he's jumped and beaten in an alley by a group of thugs while hawking electronics.

Implored by his co-workers to take measures insuring his safety on the streets, he discovers the most enjoyment watching "The Murray Franklin Show" with his mother. Both are enamored with its Carson-like host, Murray Franklin (Robert De Niro), whom Arthur dreams of someday meeting when his stand-up career takes off and he's asked to appear on the program. Things start looking up when he gets some club gigs and starts dating Sophie (Zazie Beetz), a cynical single mother who lives in the same building. But with his fragile mental state, Arthur's always one dangerous incident away from being pushed over the edge. And it's coming, no matter how often his mom tells him to "put on a happy face."

Despite taking place in "Gotham City," let's just call it what it is: late 70's, early 80's New York City. It not only looks and feels like it with the grafitti, garbage and porn shops, but the prevalence of the same socio-political issues as well. It's essentially a period piece, and more discussion should probably be centering around how that informs and even exacerbates the shocking events. And when talking about a mentally ill character, how it pushes him further over the edge when any or all of the few options available to him start to rapidly disappear. The idea of placing Arthur in this setting during that era was a masterstroke by Phillips, greatly heightening the intensity of nearly everything that occurs over the two hour running time.

Rarely does relief come from the feeling of being trapped in a powder keg ready to explode, and for someone like Arthur, it's a living hell. Phillips' and Scott Silver's script nails the idea that back then no one, aside from medical professionals, would recognize something as rarely talked about or acknowledged as mental illness. As a result, the surrounding characters pretty much write him off as merely a creepy "weirdo" no one would even think of considering a danger or threat on his worst day. It's this all too familar underestimation that helps leads to devastating consequences in a tumultuous city ripe for the picking. The setting also gives the movie an incredible out, allowing Arthur's behavior to rise to alarming heights before law enforcement get involved, albeit way late. And based on the time period and circumstances, it's believable, allowing a crucial suspension of disbelief most other films couldn't get away with. This does, and masterfully.

A noticeably emaciated Phoenix has to walk a tightrope here, conveying a sincerity and almost childlike innocence and curiosity in Arthur when we first meet him. He takes his job seriously and believes he can go places despite the obstacles facing him, until it becomes too much for his emotional faculties to process. His laughing condition (a real life disorder ingeniously incorporated into the character) only magnifies the awkwardness of every already awkward encounter he has. Very few of his relationships are functional. Whether it's with his mom, co-workers, boss or girlfriend. The latter is especially rife with dysfunction, almost immediately sending out warning signs that something's amiss in this dynamic, possibly on both sides.

It's hardly a spoiler to state that once the Sinatra and Chaplin aficionado obtains a weapon for self-defense and gets his first taste of violence, Phoenix is able to take Arthur on a credible trajectory from someone who initially appears as if they couldn't hurt a fly to an unstable vigilante starting to get noticed and drunk with delusions of grandeur. His problems keep piling up, but because so many of Gotham's lesser off inhabitants can closely relate, he may eventually end up getting his time in the spotlight after all. Just like his idol, Murray Franklin. After all, what Arthur always craved most was attention and adulation. Echoing shades of Taxi Driver, he'll eventually get it, just not in the way that he or anyone else would have envisioned.

Cleverly riffing on former co-star Jerry Lewis' role opposite his in The King of Comedy, De Niro delivers his most memorable supporting turn in years, proving to be a far more engaging presence as the fictitious talk show host than the notoriously guarded actor's been as a real life guest on them. How the media-obsessed Arthur's path eventually crosses with his should seem absurd, and it is, but it also ingeniously highlights the social divide in Gotham, giving this tragic clown a pulpit from which to preach. Police involvement in Arthur's crime spree may be much delayed, but in the midst of such turmoil, it's still easy for him to continue going undetected and unnoticed as a local celebrity, just as as he has his entire life. What occurs in the third act may be extremely violent and disturbing, but the inevitable path was paved for it the entire time.

The only references made to anything related to the Batman canon are passing ones and strategically placed Easter eggs that fans will notice and appreciate without alienating others completely unfamilar with the character or its history. Really, all of that can be thrown out the window since this is about as far removed from that universe as it gets. Even the inclusion of the Wayne family is mainly to further fuel the wealthy disparity crisis ripping apart Gotham. There's also a deeply personal angle to this involving Arthur that's strangely effective, adding a lot of fuel to an already burning fire.

While this isn't some kind of Joker "origin story" and thankfully exists independently from any scenario in which such a term would exist, some audiences will probably still reserve the option to view it as such. Let them, just as long as there's never a sequel to this, and it stands just where it is. There's a thrill in knowing the only goal was to serve this specifically memorable character and story rather than feed a studio machine just waiting to churn out inferior mainstream follow-ups that would only undermine the exceptional work done by Phillips and Phoenix.

Even in a long line of Phoenix performances, this is one for the ages, and as serious and unsettling an exploration of mental illness as you're likely to see on screen. Those in doubt need only look at the controversy surrounding its release and the real fears that some could view an examination of this protagonist's problems as a call-to-arms, and a provocation to commit violence. That it caused such a an uproar speaks to the massively discomforting chord this story strikes, albeit one we've unfortunately gotten all too familiar with. If anything, let Joker stand as a warning against us ever becoming numb to it.
Posted by jeremythecritic at 6:11 PM