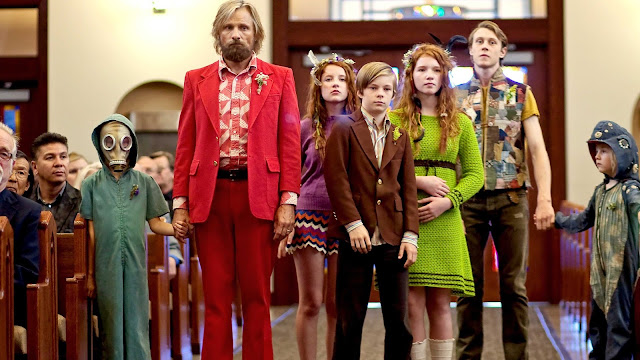 Captain Fantastic addresses so many issues that feel so "here" and "now" it's almost downright uncomfortable at times. And if nothing else, it's blunt. As direct and upfront as the controversial title character, Matt Ross' film seems to play by its own rules while asking the audience which rules they'd rather play by, if any at all.  It joins 10 Cloverfield Lane, as one of the few releases this year that could double as a veiled social commentary on the current political climate. But this is operating at an entirely different, more thought-provoking level. It first it comes off as kind of a call-to-arms, with a protagonist's complete rejection of a society protecting and coddling their "snowflake" children while isolating them from any kind of self-sufficiency. Then the narrative zigs and zags in different directions, asking deeper questions before arriving at a conclusion that should infuriate as many as it elates.

Supposedly, Steve Jobs despised the phrase, "That's just what people do," writing it off as a lazy explanation for decisions and behavior unaccompanied any questions, only helping to further promote a thoughtless, herd mentality. It's likely Viggo Mortensen's title character would wholeheartedly agree, with views and philosophies for raising his children that fall way out of line with contemporary society's. A couple of decades ago it may not have seemed as extreme, but in a more politically correct than ever 2016, it's downright shocking. And there are undeniably many instances where his unorthodox methods qualify as dangerous and abusive, regardless of the era. Then there are those other moments when some of his ideas, against our better judgment, really make a certain amount of sense and we've perhaps moved too far away from them. Regardless, it's clear most parents would kill to have the connection this man has with his kids. But when the real question of how far his rights extend as a single dad to determine what's best for his sons and daughters' well being, the waters become even murkier. There are no easy answers or pat resolutions here, but boy am I grateful there's a movie with enough guts to ask the questions.

Following his wife Leslie's hospitalization for mental illness, Ben Cash (Mortensen) is raising his six kids, Bo (George MacKay), Kielyr (Samantha Isler), Vespyr (Annalise Basso), Rellian (Nicholas Hamilton), Zaja (Shree Crooks), and Nai (Charlie Shotwell), alone in the Pacific Northwest wilderness. Living off the land, he instills in his children survivalist skills while also home schooling them literature, philosophy, science, history, foreign languages and physical education. But when Leslie takes her own life and Ben and the kids want to attend her funeral, he has a decision to make. Blaming Ben for Leslie's death, his wealthy, estranged father-in-law Jack (Frank Langella) warns him an appearance will result in his arrest and potential loss of parental custody. Never one to back down to the privileged, he takes the kids on a road trip in their bus, exposing them for the first time to the capitalist city life he and his late wife consciously removed their family from.  And it's only when they start dipping their feet into the waters that are the "real world," to carry out Leslie's dying wishes, are the full consequences of Ben's parenting style evident, as are it's positive and negative effects on these unusually bright kids.

It's rare to find a film where it's tough to determine exactly what could happen next before finding out that it could be anything. In Captain Fantastic, that's mostly attributable to the unpredictability of Ben and the many different shades Mortensen brings to this conflicted character. There really is a feeling that he's not only driving the van for this road trip, but the entire narrative since so much of it revolves around how he stubbornly shapes the lives of his children, both to their benefit and eventual detriment. He's strict and inflexible, yet at the same time manages to show them a surprising amount of respectful affection that's never anything less than completely authentic.

There's much to admire in how much he thinks these kids can handle if he's simply matter-of-fact, even straightforwardly explaining to his six-year-old exactly what "rape" is despite her being at an age where she doesn't need to hear it, or arguably shouldn't. When that invariably leads to her asking about "sexual intercourse," he responds similarly, with solid facts unaccompanied by any kind of judgment. Whether or not it's an appropriate topic of conversation, there's less doubt that this was the most effective way to do it. Ben just doesn't want to hear teen daughter Kielyr talk about her recent reading of Lolita in terms of what it's about. He wants to know what it's really ABOUT and how she interpreted it. And as usual, the word "interesting" is forbidden since, you know, it doesn't mean anything.

As played by Mortensen, Ben's such an easy, laid-back character to root for that you want to look past the holes in his philosophy that manifest when they make a stop at his sister (Kathryn Hahn) and brother-in-law's (Steve Zahn) house. How they've raised their two sons seems to represent the kind of protective coddling Ben and Leslie rallied against when they moved their family off the grid to escape a smothering, materialistic society. When Ben and the kids arrive, it's two extremes trying to co-exist at one dinner table and the result is not only emotionally combustible, but illuminating in how it reveals just how much of life his kids are missing out on, despite the number of books they've all read, wildlife they've hunted or weapons they've brandished.

Whatever real life experience has been gained by these kids, few of it has actually been applied, to the point where Ben, in all his best efforts to raise independent, free-thinking, self-sufficient offspring, could unintentionally be realizing his worst fears by sheltering them in a bubble. It's perhaps most apparent with the eldest, Bo, who has his first, awkward experience even talking to a girl (played by Erin Moriarty) on this road trip and greatly fears revealing his college ambitions to his dad. Younger teen Rellian hates his father's methods altogether and would far rather live like a normal kid and play video games than celebrate fictitious holidays like "Noam Chomsky Day."

Ben's father-in-law isn't depicted as a sneering, one-dimensional villain angling to take his grandchildren away to settle a grudge over his deceased daughter. He does want to take them, but perhaps for very valid reasons and the events that unfold as a result of it feel more painfully realistic than the over-the-top movie confrontation we'd expect. Ben's a good man who cares deeply for his kids while Jack's concerns about the safety and future of his grandchildren come from an equally sincere place. It also helps that Langella plays these scenes just right, expertly walking a fine line other equally subtle actors couldn't in only a few scenes. Then there's the issue of how much say Ben should really have in upholding his late wife's wishes considering her precarious mental state would almost have to call those into serious question. None of this feels easy and Matt Ross' screenplay doesn't insult us by implying otherwise.

Filled with plenty of lighthearted moments and laughs, it would still be inaccurate to categorize this as anything but a drama since the ground it covers is thematically much deeper than it appears on the surface. Viggo may be the anchor in a tricky, multi-faceted role that could have gone wrong in a number of ways, but the kids are good too. George MacKay, previously a strong presence in Stephen King's 11.22.63 miniseries from earlier this year, brings a loony, sincere naivete to Bo while Samantha Isler is also a standout as Kielyr, channelling a sort of Shailene Woodley in training. The much discussed ending is somewhat brave, keeping with the spirit and tone set from the start. Three quarters of the way through, you think you know exactly where it's going, and had it ended that way, we'd still have a perfectly fine film. But it would be one with a rather black and white message that wouldn't lend itself to the type of discussion the film's still generating and should continue to.

This all does feel more like a writing achievement than a directorial one, and while you could argue whether the execution lives up to the magnitude of its ideas, it lays claim to something few other 2016 films can: Cultural Relevancy. It feels significant in how it turns a mirror to our society, coming closer to pinpointing the sociopolitical rift that's developed in this country than most works this year. It's almost scary how its finger rests on the pulse, going so far as to anticipate a discussion that's only now starting to permeate our culture in a major way. It could be read as a warning on the dangers of extremism in either direction and a call for compromise. But however you describe Captain Fantastic, just don't call it "interesting."

Posted by jeremythecritic at 4:29 PM