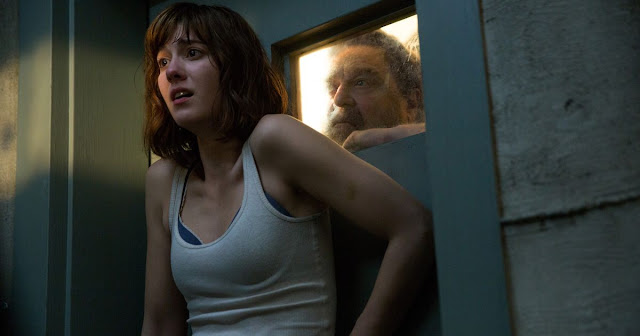 
**Spoiler Warning: This review gives away key plot details, including the ending**

10 Cloverfield Lane raises a fascinating question for any critic or audience member who might happen to share my general opinion of it. And there will likely be more than a few. What happens when 90 percent of a movie is amazing, but the last 15 minutes are so misguided and disappointing that it threatens to completely overshadow whatever greatness came before? In this case, there was a lot of it, from the overall premise to the atmosphere and performances, it shares very little in common with 2008's monster movie Cloverfield, which was throwaway fun. This isn't. It's something much more than that for a good deal of its running time. With its production, eventual release and title somehow managing to stay shrouded in secrecy, few knew this "spiritual sequel" to Cloverfield was even coming, much less what it would be about, or who would star. But more importantly, that it could be done this well. That may be why the ending is so infuriating, but for me a bigger reason is that I was treated to two of my favorite actors going toe-to-toe for 90 minutes in the service of a story that came so close to doing them and viewers proud, only to drop the ball at the end.

What eventually occurs in no way diminishes those performances, but that any studio thought the idea of John Goodman as a survivalist holding people captive in an underground bunker wasn't scary enough on its own is mind boggling. On top of that, the script attaches enough moral implications and questions to what he's doing to make Rod Serling proud. What he wouldn't be so proud of is the ending. And it's not so much that I'm completely against what they did (though I still didn't care for it), but rather how. So here's my advice: When you get to about the hour and twenty-five minute mark, just hit "STOP" on your remote and turn the missing minutes into one of those old school "Choose Your Own Adventure" books where you pick the ending. There's little doubt whatever scenario you come up with will be more compelling than what the filmmakers ultimately chose. And the sad part is, ending notwithstanding, it's still one of the year's most compelling films.

When we first meet Michelle (Mary Elizabeth Winstead), she's packing up and leaving New Orleans after an argument with her fiancé Ben (voiced by Bradley Cooper). Distraught and distracted by news of major blackouts across the country, her car suddenly hits something and careens off the road. She awakens in a basement chained to a wall with an IV in her arm. The man holding her there is the burly, intimidating Howard Stambler (John Goodman), an obsessive survivalist who's built a fallout shelter under his farmhouse in the event of an attack, nuclear or otherwise. According to him, such an attack has already occurred, claiming the lives of nearly everyone outside who breathed the contaminated air.

Michelle and a man named Emmett (John Gallagher, Jr.) who forced himself into the bunker, are told by Howard that under no uncertain terms can they leave until the poisoned air's safe, which could be two years at the earliest. Not buying the far-fetched story and assuming she's been kidnapped by a crazed lunatic (with Howard's actions doing little to contradict that), a terrified Michelle makes plans to escape, but will need Emmett's help. Even as evidence mounts that there might be some truth to Howard's claims that the terror awaiting them outside is far worse than anything he can dish out.

Whether or not this was an intentional inspiration, the premise thematically draws certain comparisons to the classic Twilight Zone episode, "The Monsters are Due on Maple Street," in which panicked, desperate neighbors turn against each another when faced with an inexplicable, otherworldly threat. This is obviously a more contained version of that but the basic idea of how far people is willing to go and the amount of force they'll exert over others for self-preservation and survival are very similar.

Frightening in its timeliness, the screenplay cleverly and indirectly tackles 9/11 paranoia, terrorism and national security through the character of Howard, who's very much grounded in the world in which we now live. With his emphasis on law and order and second amendment rights it's not hard to picture him heading out to the polls on Election Day, packing heat and wearing a "Make America Great Again" hat. That's not a knock on Trump supporters, but rather a reasonable interpretation of this character based on the evidence, as well as a credit to Goodman's complex, forceful performance, which wildly vacillates between cold and detached and enthusiastically charismatic at the drop of a dime. It's because of him that we're able to get that clear a picture of the man, knowing exactly what he stands for and what pisses him off. The writers should also take some credit for concocting a character that really hits a cultural zeitgeist they couldn't have possibly known about when this went into pre-production.

What we're fuzzier on are the stoic, often humorless Howard's exact intentions, which is where so much of the film derives its suspense. The first inclination is that he's a psychotic kidnapper since his doomsday scenario doesn't add up on any logical level and he seems to care way too much about Michelle and Emmett attempting to leave (escape?). Then the clues drop. While certain details suggest Howard could actually be telling the truth, or at least some version of it, he's still a controlling terror with whom sharing any kind of space is dangerous. And yet, because he's played by Goodman, there are these moments of humanity where it seems as if he's legitimately invested in their well being as if they were his offspring. Evolving into this dysfunctional family, they eat together, play board games and watch movies as if Goodman were reprising his role as Dan Connor on Roseanne. The whole thing is so oddly fascinating and atypical of what you'd expect, even as tension continues to build to a fever pitch around Howard's personal history and reasons for holding them.

After turning in impressive, overlooked work The Thing remake, small, character-driven indies like Smashed, Faults and Alex of Venice and in TV's short-lived The Returned, I've always contended that Mary Elizabeth Winstead is only about a role or two off from occupying the same spot her Academy Award-winning Scott Pilgrim co-star Brie Larson currently does. This film probably won't get her there but it still represents the latest in a long line of inspiring choices that show off a dramatic range few know she possesses. In fact, most of the film and her performance recalls the first act of Room, which only makes it that much more frustrating when this eventually deviates from that psychological template.

Michelle is caught in a desperate, hopeless situation right off the bat, and the thrill comes in watching her try to process that, read it, and determine how to react.  The wheels are always turning, as she attempts to negotiate her way out of this predicament and nearly every scene Winstead shares with Goodman carries this consequential weight that nearly suffocates you with suspense. There's a an unbearably tense scene at the dinner table when director Dan Trachtenberg milks the suspense to such a point that the payoff literally caused me to jump. Gallagher's Emmett at first seems to be a major dope blindly following Howard, until his personality and motivations start figuring into the equation in surprising ways.

Considering its title and the fact this supposedly takes place in the same universe as Cloverfield, an argument could be made that we know what we're getting into. I'll cop to that, but still doesn't make the final minutes of the film any less ridiculous, disappointing or poorly executed. The script eventually has to lay all its cards on the table and reveal whether this is a straight-up abduction or some kind of cataclysmic event has actually occurred outside and Howard's holding her there for her own protection and his. Or maybe it's some kind of combination of both. In other words, she has to eventually escape and see what's out there. We know this and it's fine. But even if you're satisfied with THE BIG REVEAL, they don't milk the moments leading up to it nearly enough or execute it with the amount of finesse necessary to justify it. Despite some defending the decision, it's simply incongruous with the tone of the rest of the picture. While I can get on board with the thematic justification and how it relates Michelle's backstory and overcoming the cycle of her abuse, that doesn't excuse involving aliens in a narrative that was fairly grounded up to that point.

Trachtenberg, making his feature debut, does a masterful job creating a dread-fueled atmosphere, but even he's saddled with a pretty thankless task in the final minutes. He responds with the cinematic equivalent of clubbing viewers over the head multiple times. But he's really just shooting a screenplay that's gone off the rails and it's likely the writers (which includes Whiplash director Damien Chazelle) were only carrying out the wishes of J.J. Abrams or the studio, who determined it was more important to continue building a "universe" that satiates the appetites of comic-con crowds than put the proper coda on an otherwise excellent film. It appears to have been nothing more than a marketing-driven decision, and while it happens all the time, that still doesn't make it any less creatively bankrupt.

If stretching for positives in the disastrous final minutes, Winstead's performance remains strong even during this nonsense and the revelation that Howard wasn't lying casts the character's previous actions in a slightly different light, causing you to likely appreciate Goodman's performance even more on repeated viewings. But I'd argue the same exact thing could have been accomplished in half a dozen different and better ways than what they eventually went with. Since it's unfair to rag on an ending this much without offering up a reasonable alternative, it would have been far more effective to have the final 15 minutes continue to build legitimate doubt as to what exactly happened, how many people survived, whether the air is breathable, or the planet even habitable.

The few minutes Michelle has to investigate before the movie turns into a special effects circus are really good and should have been stretched longer. Then, and only then, if they want to pull the trigger on the reveal (even one as silly as this), it would at least carry greater impact and they could quickly get to the end credits to preserve the integrity of what came before. Of course, had it just been a more believable threat that matched the tone of the rest of the film there would be no need for this discussion. But that wouldn't sell tickets. That's what's so frustrating about 10 Cloverfield Lane, which for most of its running time delightfully shares as little in common as possible with its predecessor. And why it's difficult assessing how much a botched ending should be counted against the overall viewing experience. One major flaw doesn't erase everything else, but it does somehow strangely make it all mean a little less than it should.

Posted by jeremythecritic at 10:02 AM