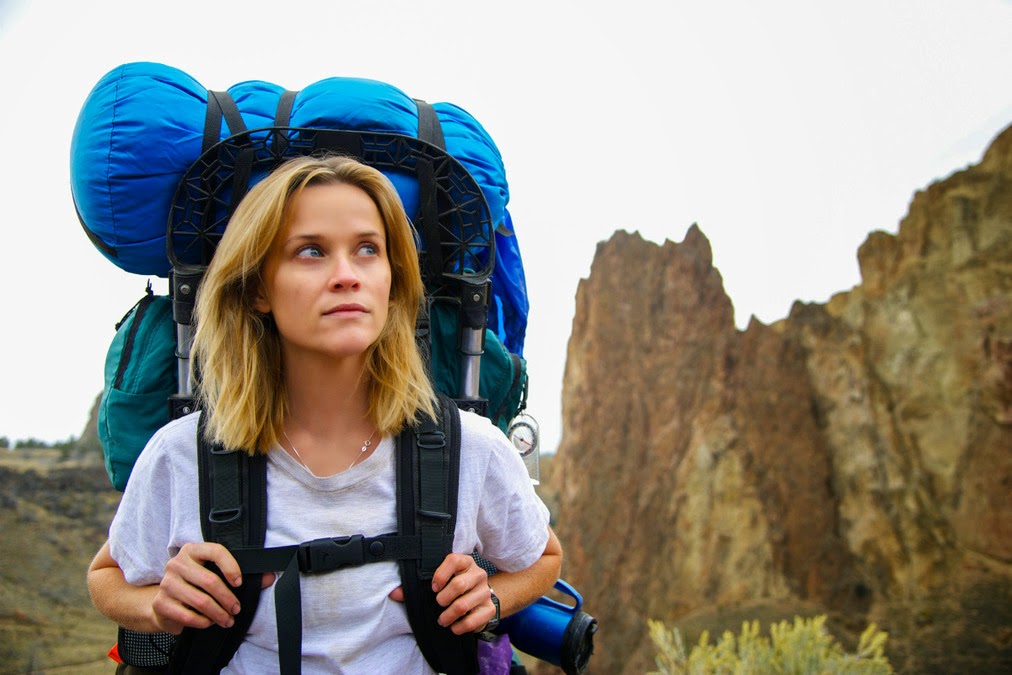 Sight unseen, the general consensus going into Jean-Marc Vallée's Wild was that it seemed from its trailers and commercials to be another Into The Wild, but with Reese Witherspoon. And while merging one of my favorite films and actresses into a single project should be a sure bet, the constant comparisons instead made me uneasy. The imposing shadow of Sean Penn's 2007 film looms large enough to wonder how this could possibly step out of it when that similar story carries a power few biographical adaptations possess. Based on Cheryl Strayed's 2012 memoir, "Wild: From Lost to Found on the Pacific Crest Trail," its author and title give away that Strayed survived her journey, one of the details that separates her from Christopher McCandliss. Another is motivation. While he spontaneously left for the wilderness to escape a society he felt was stifling him, both finding and destroying himself in the process, Strayed's purpose was to escape herself and a tragedy with which she couldn't cope.

Unlike McCandliss, who never had any plans to return, Strayed's trip was always meant to be temporary, designed to give her the fuel to rebuild her life and reach a sort of self actualization. Other than that, their trajectories and the films inspired by them are so remarkably similar you'd think their paths crossed. Journal entries, flashbacks, voiceovers. It should be a screenwriting nightmare, but what worked then works again now. With Witherspoon holding us under her spell with her deepest, most meaningful work since winning the Oscar for Walk The Line, it succeeds on its own terms, somehow proving there is room for both. There are surface similarities, but Wild's style and execution sets it apart from any survival story preceding it.

Four years after the death of her mother, Bobbi (Laura Dern), Cheryl Strayed (Witherspoon) makes a decision to hike over a thousand miles of the Pacific Crest Trail to cleanse herself of the mess her life's become following that tragedy. Having cheated on her husband, Paul (Thomas Sadoski) and spiraled into an addictive pattern of drug abuse and promiscuity, she sees the trek as the only way to find the person her mother said she could someday be. And since drifting away from everyone from her life in Minnesota, including younger brother Leif (Keene McRae) and best friend Aimee (Gaby Hoffmann), it'll have to be done alone, braving the elements, but often aided and kept company by the memorable people she meets along the way. Well prepared and powered almost entirely by pure emotion, Cheryl frequently endangers herself to complete the hike, hoping to arrive on the other side with a renewed sense of clarity and purpose that's been absent since her mother's passing.

Rather than going the more expected route of telling Cheryl's backstory then leading up to the actual hike, the film does both at once, intercutting flashbacks of her life within the chronological depiction of the grueling hike. The danger she encounters often comes from unexpected places and people, even if she's seemingly always alert and well-prepared for what could come her way. Perhaps the biggest difference between this and Into The Wild is that Cheryl's rarely flying by the seat of her pants or falls prone to rash decision-making. And while her journey does come off as spontaneous to an extent, it looks to have been meticulously planned out and researched, which is noteworthy considering this takes place in a pre-internet era.

Watching her struggle with a near 60-pound backpack, it's fair to say she's come overprepared, as she finds out in a memorable scene in which a seasoned hiker helps her lose some worthless supplies to cut weight.  It's just the kind of mistake a really smart, but inexperienced person would make and it's in those small details that Nick Hornsby's script is sharpest. You'd hard-pressed to name another film in this genre where we see exactly what supplies are brought, then have them show up later to advance the plot. It also contains a rare instance of justifiable product placement, dispensing revelatory information about a company doing something great that we wouldn't otherwise have known. It doesn't come off as a cheap plug because it's true and worth hearing about. More importantly, we believe this character would react strongly to it.

As much as this is a battle against the elements and an endurance test for Strayed, her biggest fight is being a woman hiking alone. It's a surprisingly big deal, but not at all for the reasons you'd expect and certainly not because the story is some kind of feminist manifesto or fluffy self-help journey like Eat, Pray, Love.  It's important because there's hardly a scene when we're not sitting on pins and needles fearing she'll be raped or sexually assaulted. It may be a controversial observation to make but it's impossible to deny this underlying (sometimes even blatant) threat exists during just about every leg of her journey. Vallée deserves credit for not brushing it under the rug, often making the viewer uncomfortably squirm with each tension-filled encounter. And it's not that he's implying Cheryl can't take of herself, but the dangers of a woman, or anyone, hiking the PCT alone and relying of the kindness of strangers doesn't come without a certain level of risk that requires the traveler to keep their guard up at all times.

Despite only nine years separating Laura Dern and Reese Witherspoon, they're believable as mother and daughter throughout the stages of their characters' lives while also credibly passing for far younger than they actually are. These aren't interchangeable parts that could have been filled by any two actresses that have the chemistry and emotional shorthand they do, which is evident every time (and however briefly) they share the screen together. It's flippant to say any film or performance can really ever "capture" the grueling ordeal or immeasurable loss of losing a parent but these scenes would be brutally raw and uncomfortable watch for anyone.

In an odd way, the role of Cheryl Strayed falls right into Witherspoon's wheelhouse, especially when thinking back to all the tenacious characters she played that demonstrated an almost unfailing resourcefulness and determination. Strayed might be the first widely known hiker to overthink everything, approaching the entire journey overprepared and almost entirely too eager. It's the kind of single-minded dramatic character Reese has unfortunately (pardon the pun) strayed from in recent years, but thankfully revisits in an entirely different and challenging form here.

Those thinking she wouldn't dirty her hands in such a physically and emotionally demanding part is a classic misreading of her strengths, but given the lackluster rom-com projects she's taken over the past few years, you couldn't be blamed. It's fitting that the same director who helped cement Matthew McConaughey's comeback with his Oscar-winning role in Dallas Buyer's Club, succeeds again with Reese, only this time with a film twice as strong. Unlike that, it isn't a one-trick pony worth seeing only for the performances, containing way too much depth and visual splendor to be merely written off anything resembling a conventional biopic.

Dern's brief but impactful presence is both the source of its lightest and darkest moments as she's called upon with sometimes very little dialogue and only passing clips to depict the inner life and philosophy of this free-spirited single mom who isn't without her own flaws. The Oscar-nominated performance is in many ways a smaller-scaled counterpart to Patricia Arquette's winning one in the same category for Boyhood, but with Dern's Bobbi coming across as even more of a carefree hippie feeling her way around being a parent. While the impression will be that Witherspoon's role is a stretch for the actress, it's easy to imagine this character as an extension of Dern's actual personality. And since she delivers so much sincerity with relatively little, this added layer serves to only make her work resonate that much more.

One of my favorite aspects of any film is seeing a vaguely familiar or maybe even completely unknown actor or actress storm in for only a scene or two and just completely nail it, owning the movie in a matter of minutes. Given its narrative structure, Wild lends itself perfectly to such opportunities and doesn't disappoint, with a parade of actors lining up as Cheryl's various hike acquaintances and people from her past and present over the course of just under two hours. There's Kevin Rankin as a fellow hiker, Everclear's Art Alexakis as a tattoo artist and Breaking Bad's "Skinny Pete," Charles Baker, as a potentially dangerous hunter. To give them all away would spoil it, but the amount of cameos and single-scene performances from recognizable (if not necessarily identifiable) faces are seemingly endless. It isn't until Strayed reaches actual civilization in Ashland, Oregon that she really starts to gain perspective on what it all means and we're given as a valuable time marker alerting us of the year this took place. Being completely unfamiliar with the story, I didn't know until that moment.

As much as this be talked up as a spiritual journey of redemption, it's as much about failure as anything else since Strayed believes herself to be one as a wife, daughter, friend and sister before taking this adventure. The flashbacks are drenched in tragedy and self-destruction, but the most cathartic scene comes toward the end of the hike, nearly mirroring an equivalently timed breakdown scene that takes place in Into The Wild. It kind of comes out of nowhere, with the culmination of events piling on to hit viewers like a punch to the gut.

Some could have trouble getting into the film's rhythm, as it bucks convention to create a loose, free-flowing narrative in which images and memories flash before us, standing in stark contrast to a strict survival tale that takes us from point A to point B. In a crowded year, Wild went criminally overlooked and underappreciated by those who felt they've seen it before. But it proves to be a thrilling ride that connects on the most basic human level, leaving in its wake a complicated mixture of sadness and triumph.

Posted by jeremythecritic at 9:39 PM

Some refer to this film as a vanity project, but whatever, I connected with the film, it got to me. I love films that are introspective and contemplative. That ending when she summarizes what her life has been like...awesome. It hasn't been easy, but its her life. And she wouldnt have it any other way. One of my favorites of the year.

It got to me as well. Didn't expect to connect to it like I did. And those calling it a vanity project? If it is then it's a damn good one that had me fooled. Agreed that it's among the year's best.