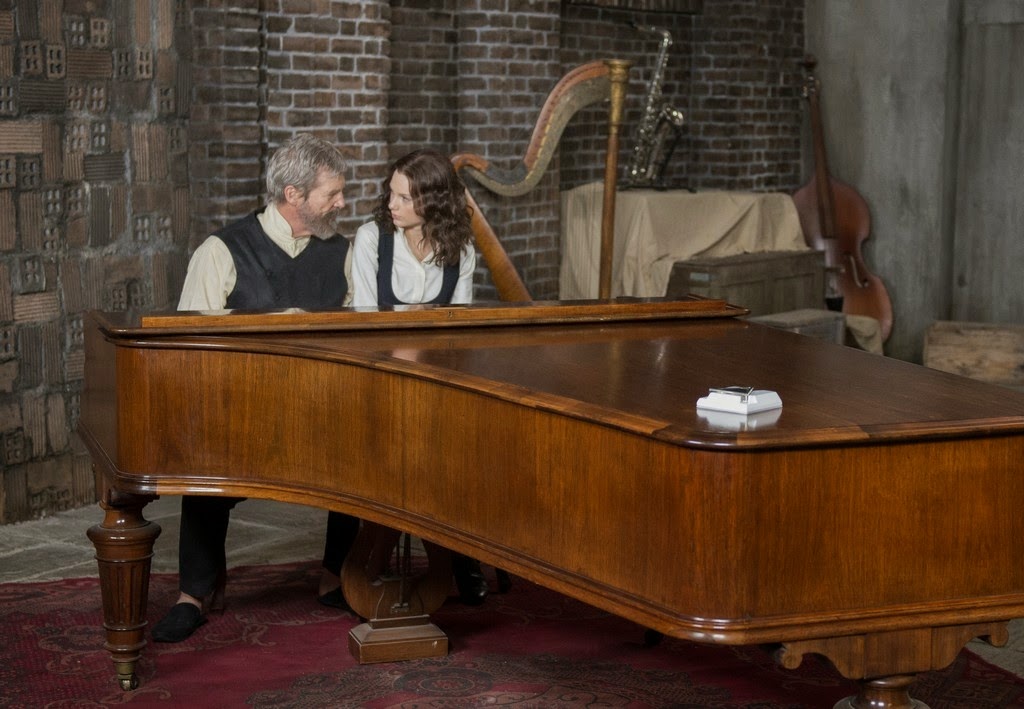 Fairly or not, Lois Lowry's 1993 Newbery Medal-winning children's novel, The Giver has been both credited and blamed for ushering in the emergence of a genre that's come to be known as "YA." That Jeff Bridges has been trying to get the film version going for so long that his father was originally attached to the role of the title character speaks volumes about Hollywood. When things are popular and making money an entirely new genre can emerge out of thin air, making previously overlooked material seem "hot." Now The Giver, a fairly challenging story no one would touch with a ten-foot pole for the past two decades, is suddenly a "Young Adult Franchsie Property." It's the same categorization that befell Orson Scott Card's Ender's Game, which was considered straight-up science fiction until producers realized it featured young characters. Between the controversy surrounding its author and the fact they were trying to fit a square peg into a round hole, box office failure was a near certainty. So plans to make the next Hunger Games or Divergent out of Lowry's more philosophically dense material is definitely cause for concern, especially considering its shared plot point of an oppressive, dystopian future. Surprisingly, or maybe accidentally, this doesn't happen.

Director Phillip Noyce has made a restrained, meditative picture primarily concerned with ideas, sharing more similarities with Pleasantville than any of the aforementioned titles, with ambition that often exceed its reach. Better yet, the material doesn't feel dumbed down or sanitized to attract a broader audience, as YA adaptations tend to (with the exception of last year's Catching Fire, which really did it right). You can't ask for more than that, even if something's missing. It could be some logic holes in the plot or the fact that the bottom kind of falls out in the last half hour, but at least those are respectable flaws any movie could have.

When people are given freedom of choice, they'll almost always choose wrong. That's the rationalization the Chief Elder (Meryl Streep) uses to govern a future society in which its citizens are indistinguishable from each other, all their emotions and memories vanquished. Everyone is the same race. The concepts of "family" and "love" don't exist. Homes are referred to as "dwellings," that are every bit as impersonal as the word implies. People aren't killed, but "released into elsewhere." The Receiver of Memory is the only community member possessing actual memories that are only used to advise the Chief Elder on decision-making and train the next Receiver. In a graduation ceremony where the community's children are ushered into adulthood with assigned jobs, Jonas (Brenton Thwaites) is chosen as the succeeding Receiver, set to be schooled by the man currently holding that position, The Giver (Jeff Bridges).

While his assigned, nameless parents (Katie Holmes and Alexander Skarsgard) are proud, taking this important position is a sacrifice for Jonas, who's ordered to keep this new knowledge to himself, even as it tears apart his childhood friendships with Fiona (Odeya Rush) and Asher (Cameron Monaghan). Now exposed to glimpses of the past both traumatizing and joyful, Jonas must decide whether the citizens of this sterilized future can handle the truth that their controlled utopia is really anything but. And whether it's his moral duty to enlighten them, despite the risks.

Whether the good is worth the bad is the central question the movie asks and the script, regardless of its faithfulness to Lowry's text, does go all in with those themes. But the big takeaway is the striking, crisply photographed black and white monochrome look of the community, impeccably lensed by cinematographer Ross Emery. The absence and eventual use of color does invoke literal and mostly positive comparisons to Pleasantville in that, besides looking sleek, it's actually functional and organic to the story. Even if the eventual incorporation of color is more gradual and less dramatically executed here, black and white's purpose in depicting a stark, washed-out world of boredom and sameness is similar. It's interesting to note that the 1998 film uses a colorless past to embrace the future while this does exactly the opposite.

The idea that our collective past informs our present, and without it, we're left with the nightmare depicted here, which is heady stuff, at least as far as YA goes. It's ironic that the opening hour, in which we're introduced to this bland, anemic society is the most exciting part of the film and far more entertaining than when the stakes are supposedly raised later. Far from being phoned in, it's an intricate and fully realized world, containing some elements that bare more than a passing resemblance to Fahrenheit 451. Jonas' training is the centerpiece, as he's slowly exposed, through The Giver, to a past the rest of his community has been  "protected" from. War. Death. Love. Snow. Sleds. It's what he chooses to do with this knowledge, The Giver's motivations for sharing it, and the Chief Elder's reaction, that forms the conflict, threatening to finally awaken this society from its cultural hibernation.

By the very nature of its concept, the film isn't heavy in the romance department, using Jonas and Fiona's relationship to make a larger point about how their society suppresses emotions. That their deepening bond is an integral ingredient to the script rather of a sideshow distraction to reel in teen audiences is a relief and a credit to the likability of the leads. While strangely not a prerequisite for these roles, neither exactly oozes charisma, and even with the ages bumped up considerably from the novel, 25 year-old Thwaites is still a bit old for the part. But he makes it work and is easy to root for, as is Rush. Both are kind of upstaged by their co-stars, which makes sense considering those co-stars are Jeff Bridges and Meryl Streep. A bearded, warbling Bridges shares the most rewarding scenes opposite Thwaites, literally and figuratively giving color to a Giver that plays as the Dude crossed with his aging Flynn from TRON: Legacy.

One of the big highlights is a brief flashback entailing the disaster involving the Giver's disastrous training of the previously chosen Receiver, Rosemary, who's played by Taylor Swift in a cameo that lasts about a minute. Given her massive media exposure, it's a feat in itself her presence isn't an unwanted distraction that takes you out of this. Rather, the nature of the role does really suit her and Noyce wisely avoids testing just how much she can handle. From a thematic standpoint the part is actually important and you're left wanting more Taylor, which was smart.

Streep is perfectly cast as this authoritative figure and overlord of the society, even if the writing of her character eventually becomes a little cartoonish when she evolves into a sneering villain. Holmes and Skarsgard are given the difficult, but fascinating jobs of playing emotionless robots, which is sure to incite a bunch of jokes about those actors I don't necessarily agree with. An ice cold Holmes scarily slips into this disturbing dystopian "mother" role, frequently lecturing the kids on their word usage while Skarsgard is at the center of a shockingly dark and disturbing scene that really opens the flood gates of the story. With this intact I'm kind of amazed the movie escaped with a PG-13, as a good case can be made the MPAA has slapped films with an "R" for less. But at least this shows that everyone involved in this project took it seriously, rarely shying away from unsavory aspects to the material that could have easily been brushed under the rug.

At a certain juncture in The Giver you realize it's gone as far as it wants and rest of the narrative will consist of checking off boxes and marking time. The last act is such a foregone inevitability that's it's really easy to just bail out and lose interest. Considering everything that came before, I was prepared to expect to unexpected, and while what we get is fitting and visually beautiful, it's certainly not surprising. The one big question bothering me was why this society even bothers having a Receiver. Isn't it too much of a risk? While their stated purpose is to advise the community, this seems like a lot of trouble to go through and too much temptation put on the plate of whomever is chosen to make it worth their while. But even that might be reading too much into it, as this is a great effort that comes close to transcending the genre's limitations by virtue of its big ideas.

Posted by jeremythecritic at 4:11 PM