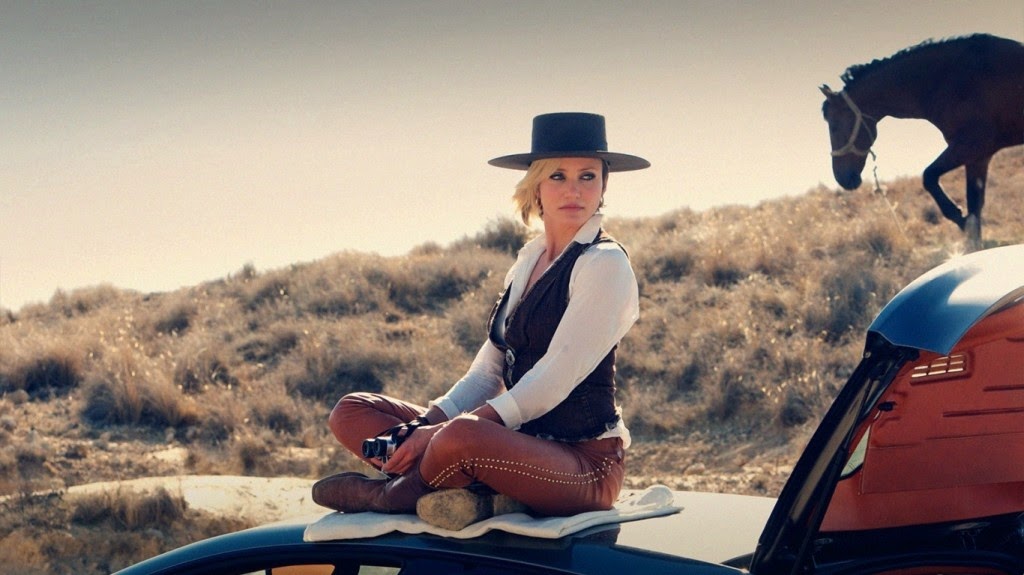 It would give me great satisfaction than to say that Ridley's Scott's The Counselor isn't nearly as bad as you've heard. But that would only be half the truth. Viewers' tolerance for just how "bad" it qualifies as will vary. But sandwiched within the mess are flashes of brilliance resulting in the type of spectacular near-miss that could only be made by a talented filmmaker. Scott definitely earns an "A" for ambition, as its easily his most intriguing effort in a while, despite wildly mixed results. If you're going to fail this is at least the most respectable way to do it, taking risks and swinging for the fences. Unsure if its a pulpy crime thriller or pitch-black comedy, the only thing audiences can be certain of is that they'll be baffled and repulsed, and maybe even a little shocked to discover the story comes from the Pulitzer Prize winning author of No Country For Old Men and the director of Gladiator. And that's assuming they can even make it through to the end. Just don't say you weren't warned.

Michael Fassbender is the unnamed "counselor" of the title, a respected attorney who finds himself in the middle of a dirty drug deal with the Mexican cartel thanks after taking some bad advice from his eccentric friend Reiner (Javier Bardem), whose cheetah-obsessed girlfriend Malkina (Cameron Diaz) has some nasty intentions of her own. Despite being warned off the deal by business associate Westray (Brad Pitt), the counselor seems to sink deeper and deeper, not only jeopardizing his own life, but that of his girlfriend Laura (Penelope Cruz). Their relationship is perhaps the only traditional element in a story that's told unconventionally, often forsaking plot and narrative drive in favor of dishing out long, symbolic soliloquies that ruminate on the nature of man and the presence of evil.

There are a couple of scenes that merit mention if only because it's unlikely you've seen anything else like them in a movie before, for better worse. One is obviously the now infamous Diaz scene, in which she pleasures herself on the windshield of a yellow ferrari as Javier Bardem's wide-eyed, crazy haired Reiner looks on in utter shock and disbelief. But what you haven't heard about this flashback is how little it has to do with anything and how it's dropped in the middle of the story without any real rhyme or reason. That's less a criticism than an observation, but also that could also reasonably apply to just about every other crazy scene in the movie, of which there are plenty. It's just that this one takes the cake as its most sensational and tittilating, its existence intended to incite that very debate. There's also a big moment in the last act involving Brad Pitt's Westray that can't really be described, not so much at the risk of spoiling anything, but because  a mere description can't do it justice.

The only predictable element in a project this bizarre is that the performances would also have to be, with the exception of Fassbender's character who is essentially the put-upon straight man amidst the insanity, with Cruz gamely taken along for the ride. Since we're so used to seeing the actor playing edgier roles that exploit his intensity it's a neat reversal to see him as an essentially weak, helpless character, dialing down the charisma he's known for. The rest of the characters at times seem to function primarily as mouthpieces for Cormac McCarthy's philosophizing, spouting thematic observations about greed and selfishness. Given her most delicious role in years, Diaz again proves (as she did in Vanilla Sky) that she's born to play a heel, making you wonder why she isn't given villainous opportunities more often. Complete with spotted tattoos, her Malkina channels a predatory cheetah in both physicality and attitude, making her by far the most eccentric and intriguing character. She flat-out steals the movie, and for reasons entirely unrelated to her showcase scene.

On paper, The Counselor seems like something that deserves praise for at least being unique and stepping outside the box, transforming what could have been a pedestrian crime thriller into an entirely different animal. But it's just such a mess, marred by the nagging feeling that there's a much better movie trapped inside, struggling to get out. It looks great but is often such a slog that it's tough to get a handle on what's happening and who's double-crossing who. McCarthy's script undoubtedly contains ideas, but they're dispensed in such an undigestable manner that the film's events seem almost beside the point.

This is all about style and flash, two words that more frequently leap to mind when considering the late Tony Scott's filmography than his brother's. In fact, if I didn't know better I would have really thought it was his last film because in many ways, it kind of plays as a bizarre tribute. For Ridley, it's major departure, and one that probably needs more than a single viewing to fully absorb as it contains considerably more passion than many of his superior films. There's an extended director's cut out there and I'd be curious to discover if any of the issues are resolved since this reeks of a project that came apart during the editing and post-production stages. But even in its current state, it's hard to claim anyone involved is phoning it in. Most successful movies aren't nearly as compelling as this failed one.

Posted by jeremythecritic at 9:42 AM