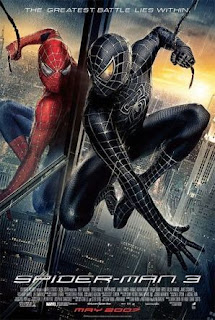 Okay, so sue me. I liked it. I guess it's true what they say about the third time being a charm because this was the only Spider-Man movie I actually found myself thoroughly enjoying from beginning to end. That I'm still only giving it 3 stars should give you an idea of how highly I think of this franchise. Are there too many characters and plotlines? Probably. There's enough material jammed in here to stretch over several movies, but I think this is a rare case where more is actually better.

I don't mind if a movie has a lot of characters so long as they all serve an important purpose in the story and I care about them. With the exception of maybe one here, who's just around for window dressing, I can honestly say I did. Considering how much is in here it's balanced very well and this is the first film in the series where I can say I actually cared about the relationship between the two main characters and what happens to them.

They took a risk here taking the Spider-Man/Peter Parker character in a new direction and a lot of audiences were turned off by it. I wasn't. Going in I suspected I'd hate this, but looking back I should have known there was a good chance I wouldn't. I tend to enjoy comic book films where our superheroes are tortured and going through "issues" (remember, I actually liked Hulk) and I'm a huge fan of the three actors they added to this third installment, one of whom plays the coolest villain we've had yet in the series.

I did think in the back of my mind that just the addition of those talents would prevent this third film from going sour. I was right. They also take a character from the first two films and flesh him out better, investing him with a considerably greater amount of depth and allowing the actor playing him a chance to shine. The film also contains one of the funniest scenes I've ever viewed in a superhero movie, a scene that for some reason audiences were put off by.

After disposing of Doc Ock in the second film, Spider-Man is on top of the world and more popular than ever. His alter ego Peter Parker (Tobey Maguire) is faring just as well, acing college and planning to propose marriage to his longtime girlfriend Mary-Jane (Kirsten Dunst), who's making her Broadway debut. Only about a couple of thousand obstacles stand in the way of potential marital bliss, chief among them the bitter grudge held by Peter's former best friend Harry Osborn (James Franco), over Peter/Spider-Man's responsibility for his father's death. He's out to exact revenge, while another evildoer, escaped convict Flint Marko (2004 Oscar nominee Thomas Hayden Church) is determined to do whatever it takes to get the medication that could help save his dying daughter.

We also find out, much to Peter's horror, that Marko could have a connection to Uncle Ben's murder. He's chased by police into a radioactive testing zone and in one of the best scenes in the film, transformed into a sand creature. Peter must also contend with a cocky new Daily Bugle photographer Eddie Brock (Topher Grace), whose girlfriend Gwen Stacy (Bryce Dallas Howard) seems to have eyes only for Peter. If that isn't enough (and I know many think it should have been) Peter's Spidey suit is infected by a black, oily parasitic substance that causes him to act out in an irrational way unbecoming of the Spider-Man we know and love from the first two films. This said substance eventually finds another agent of evil through Eddie Brock, who as Venom tries to even the score with arch nemesis Peter.

There's a lot going on in this picture. An awful lot. You could argue way too much. But you know what? I enjoyed most, if not all of it. Could at least one of these villains been saved for another Spider-Man installment? Absolutely, but that's no reason to punish the film for executing what it has in it very well. It's a juggling act for sure but one the movie pulls off impressively considering how much is crammed into its running time. Sam Raimi, Ivan Raimi and Alvin Sargent's screenplay actually makes some interesting choices this time around and we're given more than just Spider-Man trying to save the world from a villain from a failed science experiment.

Most comic book movies would be lucky to have even one villain that's somewhat interesting. Here we have four. After being given nothing but nonsense for two straight films, James Franco's Harry Osborn is finally given some depth in the third outing and his amnesia storyline is not only compelling, but very well acted. The transformation that character undergoes during the course of the film is actually believable thanks in no small part to Franco's terrific work. He really shines here and the movie effectively closes the whole Parker/Osborn saga in the best way possible. I was also very relieved he didn't have the same cartoonishly laughable Halloween costume his father did in the first film.

The Sandman breaks the mold of previous Spidey enemies in that he actually has some kind of a purpose and backstory that's interesting. He's not out to just kill people and I like how Church plays him as a real human being who was dealt a bad hand instead of just a villain bent solely on total destruction. Too many actors would have just hammed it up, but he wisely turns the volume down and gives a very effective performance as this troubled man. I've criticized the visual effects in the Spider-Man films in the past but when Marko transforms into the Sandman it's awe-inspiring and you can't take your eyes off it. If I have one complaint, it's that this character wasn't given a stand-alone film because he's by far the best villain they've had in this franchise. Still, I can't say he's given the shaft here at all.

Topher Grace was the perfect casting choice as a foil for Peter Parker since the actor does really seem like a more sarcastic version of Maguire. While I enjoyed the newsroom feud between Parker and Brock, I'll admit the movie did probably bite off a little more than it could chew by transforming Brock into Venom during the last ten minutes of the film in a real stretch of believability, even for a movie like this. It's almost as if they were desperately running out of time and had to try to squeeze it in.

Of all the characters, Gwen Stacy is the only one that could be considered useless and there just really as a plot device. Bryce Dallas Howard is also saddled with the clunkiest dialogue in the film, particularly in the scene where she presents Spider-Man with the key to the city. It's clear Howard was cast just so we can look at her, but seriously, can I really complain about that? This film also does more with even the most minor characters like Bugle editor J. Jonah Jameson (J.K. Simmons), Peter's flirty next-door neighbor Ursula (Mageina Tovah) and Bruce Campbell, who has his funniest cameo yet in the series.

Many criticisms have been leveled against the scene where EMO Spider-Man struts down the street Saturday Night Fever style but what everyone seems to be missing is that IT'S INTENDED to be funny. And it is. I was laughing with it, not at it. Complaining that this, of all things, seems out of place is especially strange when you look at some of the stuff that unfolded in the first two films. Is it not "serious" enough? Raimi already proved he has no intention of taking any of this seriously before so it's pointless to expect him to now. I was actually relieved he finally embraced just how silly this whole thing truly is. Batman Begins this is not. I thought Maguire pulled off the egotistical transformation well and it was nice to see something different finally being done with the Spidey character that cast his relationship with M.J. in a new light and created an inner conflict for Peter.

It was fascinating to watch Peter's obliviousness to his own self-absorbed behavior and its effect on those around him, specifically M.J. That combined with the developments in Harry's character create an engaging moral center in the film. Fans have bashed Kirsten Dunst for her comments to the press that the Spider-Man franchise couldn't survive without her, but for the first time here I was left wondering whether she may actually be right. I thought this was her most mature, self-assured performance of the series and the first time she looked truly comfortable in the role. Watch the scene on the bridge with Peter or the one in the kitchen with Harry. She's really good. But that doesn't mean I'm not at least a little curious what would happen if Dunst and/or Maguire don't sign on for Spider-Man 4.

This has one of the better endings of any of the Spider-Man films (even if I could have done without a running reporter's commentary describing the action) and all the stories tie together at the end, a small miracle considering how many of them there are. I especially liked the decision Raimi made with the Sandman character in the finale. Some of the complaints against the film are valid, but they're not nearly enough of them for me not to recommend it. A little too much was stuffed into one film, but I don't think it in any way hurt what we're given. It seems a little crazy to criticize a film that should be built on excitement and excess for giving us too much of it. If this was a low budget emotional drama I could understand, but it's a huge event movie. The overkill almost seems appropriate.

This film's 139 minutes flies by and it isn't plagued with the minor pacing problems of this summer's other big action blockbuster, Transformers. I can't imagine how anyone could come out of this feeling short-changed or disappointed. What did you expect? It's just plain fun. I'm no fan of the franchise, but now the only reason I can find not to look forward to a fourth installment is that maybe all the villains and storylines have been used up. I wouldn't be crying if the franchise ended on this note, but at least now I'm not dreading the next film if it does come. Raimi must be doing something right. One thing can be said for sure about Spider-Man 3: There's enough in it that you won't be bored.
Posted by jeremythecritic at 1:37 PM